Dinner at  the lovely Rebelle, on the Bowery, with Vanessa way back. We’d tried to eat at another restaurant in the East Village but the wait was too long and we were famished for some good food and wine. Upon arriving, we were seated immediately and dug right into some crusty miche with ramp butter, raw oysters with a punchy mignonette and a glass of nice, crisp champagne. Bread, butter and oysters…a great meal in itself. 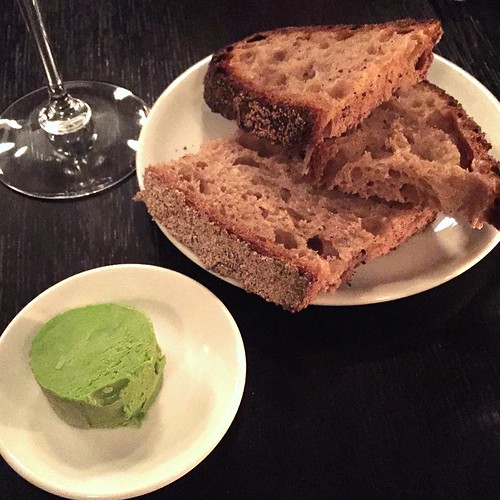 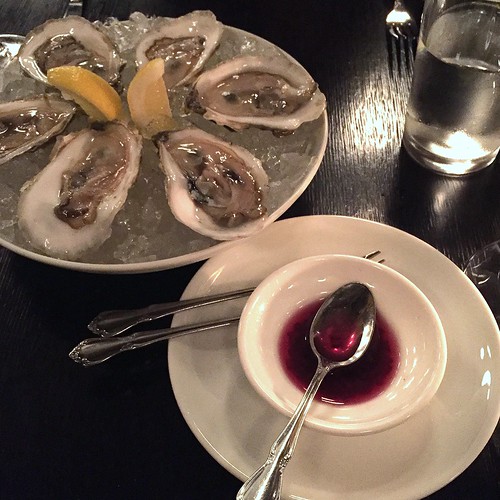 But, per usual, we didn’t stop there and ended up ordering a slew of other dishes, including the beef tartare; white asparagus and seared scallops. The beef tartare was a wonderful mix of textures – chewy, high-quality beef with a smooth sunchoke cream, spicy, pungent kick from the horseradish and garlic combination and salty crunch from sliced fried sunchokes. The seasonal white asparagus with beurre blanc and summer truffle appeared rather simple but was a highly finessed, earthy dish and the scallops with uni, turnip and squid ink balanced marine briny-ness with a pop of sweet apple. 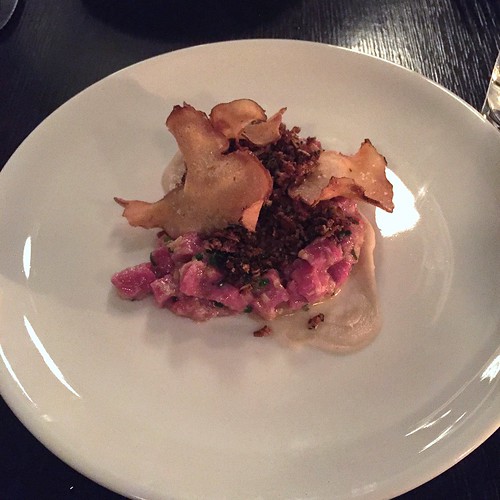 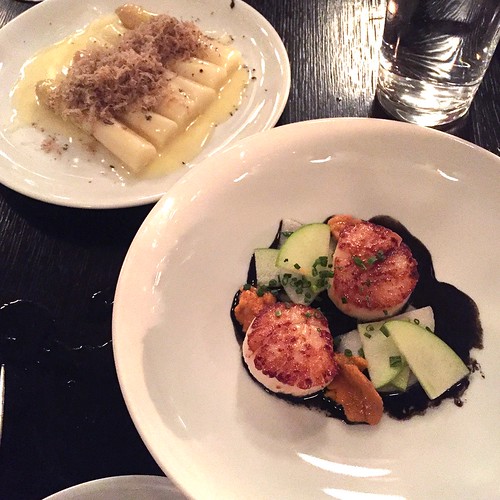 Finally, even after all that, we were still hungry and decided to share a main course of roast duck with frisee, pistachio and pickled pearl onions. It was cooked to pink perfection with crispy skin (and just the right amount of fat left) with a delicious glaze and crunch from the nuts. The service and ambience were also all-around good, so will definitely try to come back some time, especially during the winter when the menu has changed and I’m craving a fat glass of red wine and even richer, heartier dishes. 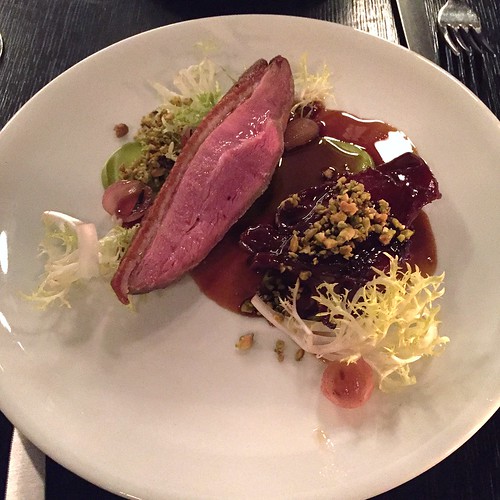 Same neighborhood, different restaurant – Bowery Meat Company for an impromptu dinner as a break from work. Given how giant and rich portions were during my first visit, we decided to stick with oysters (raw and broiled) to start as opposed to any of the other appetizers and then our separate mains. Our beau soleil oysters came with pineapple cucumber salsa and the kumamotos with wasabi leaf and lemon. Refreshing and perfect for the summer. The broiled oysters with garlic, romano cheese, bread crumbs and parsley were a totally different take and though I usually prefer my oysters raw, these were so cheesy and indulgent that I kind of forgot about the beau soleils and kumamotos. 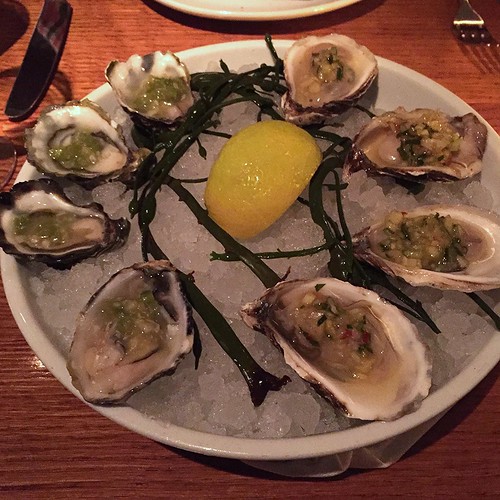 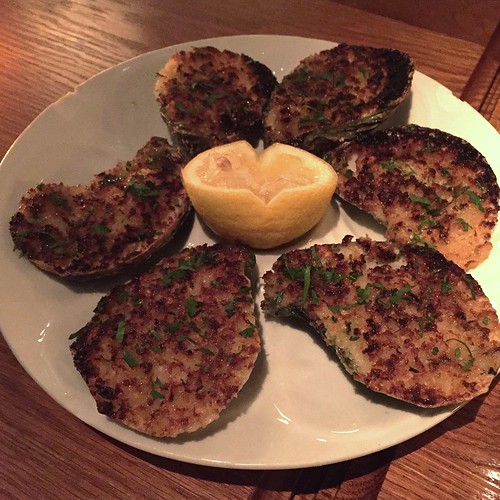 For our mains, I ordered the Bowery steak with salsa verde and whipped potato – a nice medium-rare with crusty char and a offset by the herbaceous salsa and Chris got the bone-in filet mignon au poivre. Sides were the memorable sour cream and onion hash brown we got during our first visit and then spring peas because, you know, green. A nice, quiet meal right before my summer got insanely busy, at a restaurant that’s normally quite packed, noisy and to be honest, too scene-y for my taste. 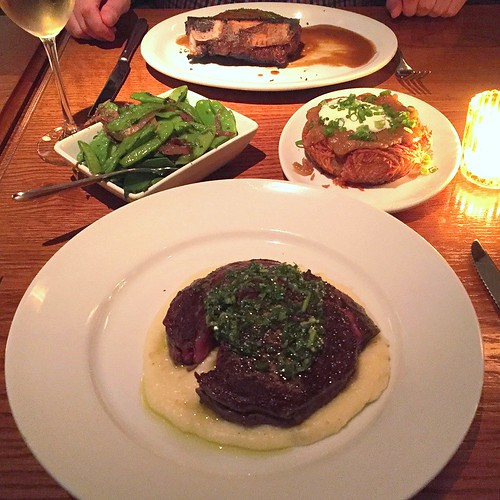 A couple days after Momofuku Ko, Artemis, Chris, Tim and I had dinner at the relatively new Bowery Meat Company, operated by the same team behind the scene-y Lure Fishbar and Burger & Barrel. Our reservation was on possibly the coldest night of the year so the idea of tucking into some red meat and red wine sounded perfect. The interior is huge with a mid-century feel (lots of Eames chairs and the like that I wanted to just pick up and take with me). I’m also really digging all of these recent restaurants emphasizing spaciousness instead of cramming as many tables as possible into a given space. It makes a huge difference when you don’t have to yell over the conversation of the people next to you and you’re not elbow to elbow with your fellow diners.

Starters: hand-cut steak tartare with grilled bread and baby romaine, which wasn’t as memorable as some other steak tartares I’ve had and needed more acid or spice to cut the beef flavor (also, nobody at the table cared for the romaine), and Chinese BBQ pork belly with butter lettuce and pickled vegetables, which had good flavor and freshness from the pickles. My favorite starter was the dish of broiled oysters with garlic, romano cheese, bread crumbs and parsley. Normally I favor raw oysters because their flavor doesn’t get lost in accompaniments or sauces but these were barely cooked through and smothered in piping cheesy, garlicky goodness, so who am I to complain? We also received some complimentary croquettes (one meat and one basil, cheese) from our server that were quite tasty. 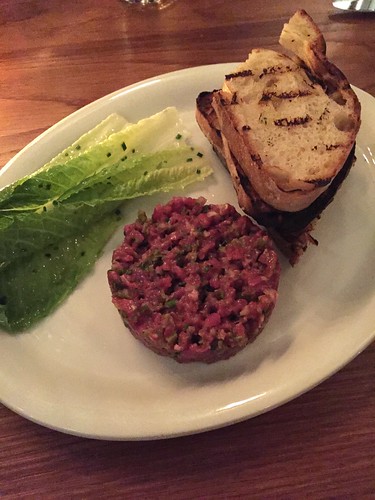 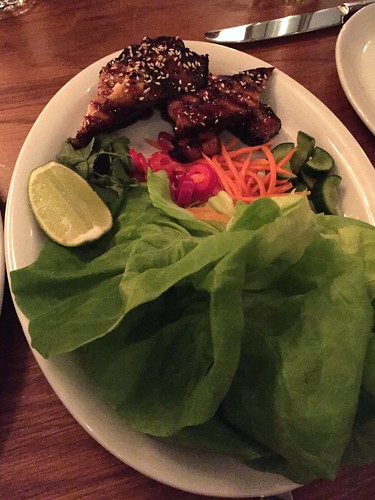 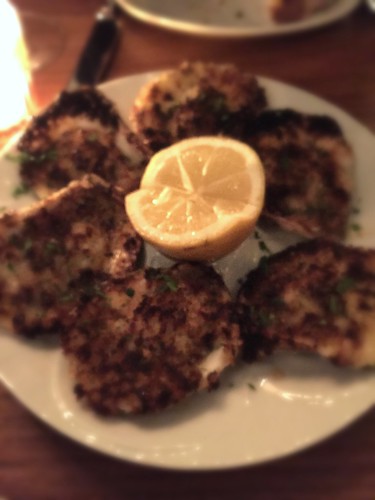 We also had a middle course of the duck lasagna for two with caciocavallo cheese and parmesan. The portioning is highly misleading because I’m pretty confident this lasagna, which comes out of the kitchen in an enormous, steaming casserole dish and is then divided table-side, could easily put four people of average eating capability in a cheese-carb coma, especially if combined with a magnum of Chateauneuf du Pape. It was SO good, especially on a night that was 10 degrees below 0 outside. At one point, I thought to myself that if I were to ever come here again with just one other person, I’d get the oysters and the lasagna and completely ignore the red meat (keep in mind we hadn’t gotten our steaks yet). I still kind of think that actually. I bet the lasagna would make for some amazing leftovers. 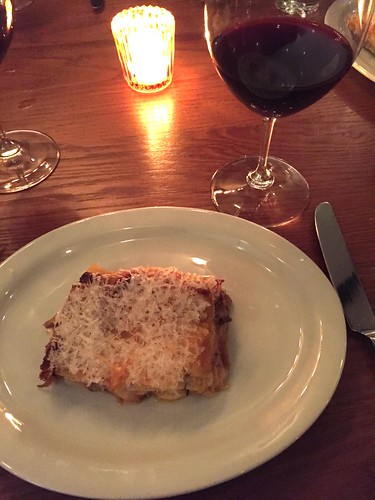 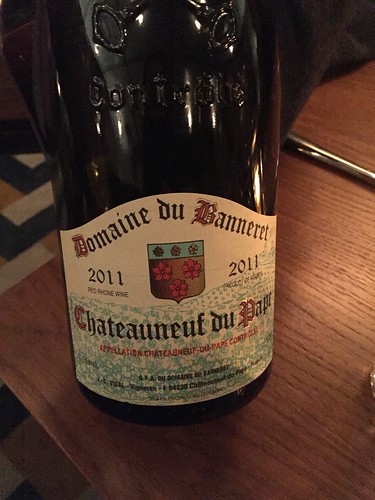 Our mains were the insane and beautiful 20 oz chateaubriand with charred brussels sprouts, parsley potatoes and sauce chasseur. No idea what a sauce chasseur is (a quick Google search mentions a sauce of demi-glace, mushrooms, shallots and sometimes tomato sauce) but it seriously made the dish. It kind of reminded me of salted toffee, with its sweet and savory qualities. I even dipped some of the frites in that ish.

We also shared the Bowery steak (Grub Street did a write-up about this interesting cut created just for BMC) with salsa verde and whipped potatoes; an enormous sour cream and onion hash brown of perfect crispiness, compliments of the kitchen; and a bottle of 2009 Saint-Estephe by La Dame de Montrose. Needless to say, by the time we finished our meal and went back out into the cold and windy night, we were well fortified by some seriously tasty (albeit heavy) food and wine in our system. 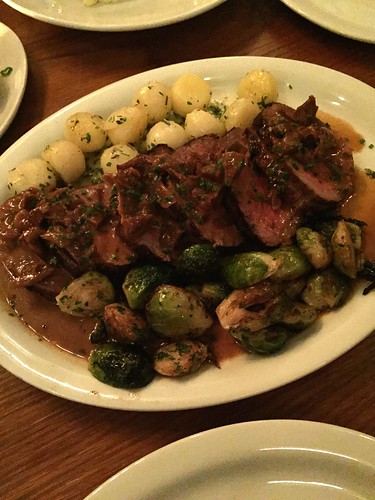 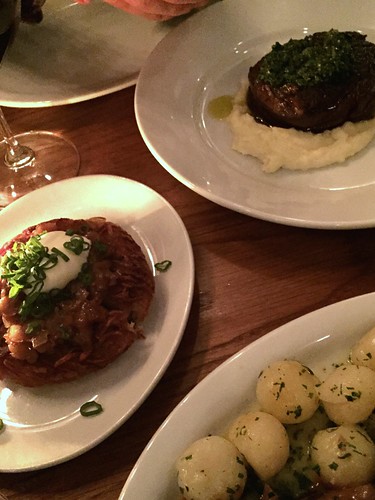 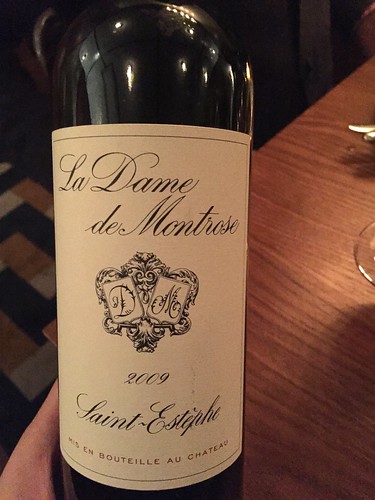 And because I hadn’t given enough money to Lelabar at that point, Artemis, Chris and I went and shared a killer bottle of 1989 (my birthday year!) Cos d’Estournel and 2013 Montepulciano d’Abruzzo. There was a point late in the evening, which included a hilarious run-in with a co-worker, when I probably should’ve stumbled home but thanks to Chris’ enabling, I was persuaded to get a bottle of the 2012 Golgotha from Scholium Project in California. Only about 22 cases were made of this period and 2012 was a standout year that yielded an intensely perfumed wine that for some crazy reason, reminded me of those tiny Asian yogurt cartons you sometimes get at the end of a meal in a Chinese restaurant or eat when you’re a kid (not sure where I was getting the yogurt component – possibly because of its three fermentations?). Bizarre, I know, but strangely evocative of my childhood in the best possible way and I could not get this wine out of my head. About a week later, Chris and I went back to Lela and had the very last bottle and in despair, I went home tipsy, scoured the internet, found it at a store in Dallas and ordered three bottles. It will take all the will power I have to not drink them all within a month. 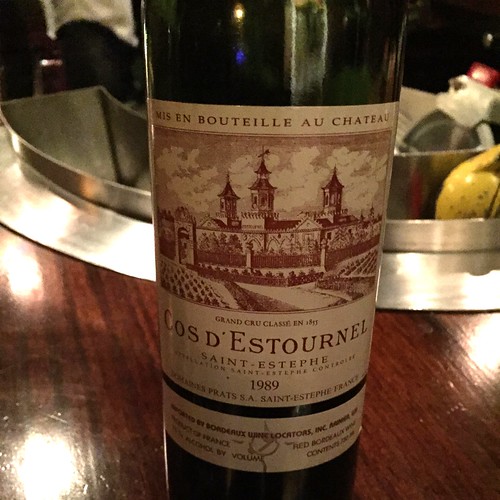 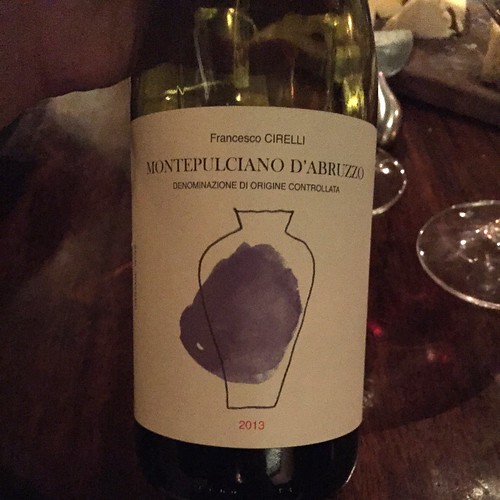 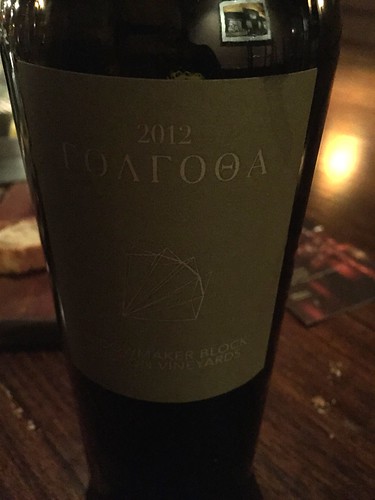 You are currently browsing entries tagged with bowery meat company at Notes on Food.