A delicious brunch with Bohee at Claudette, right by Washington Square Park, consisting of their chicken liver mousse with soft, squishy pain Tunisien and a super juicy lamb burger 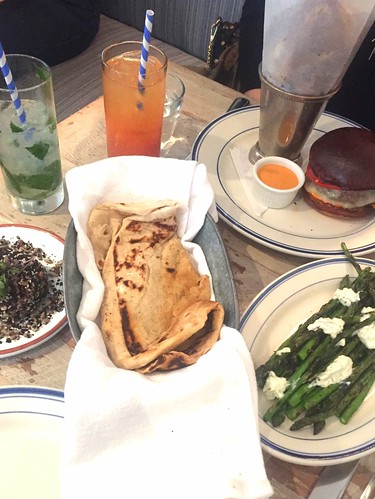 Another solo visit to Via Carota in the middle of a day of errands. The bartender highly recommended the lemon grilled chicken and though it didn’t sound particularly thrilling on the menu, I was impressed (and it’s so cute!) 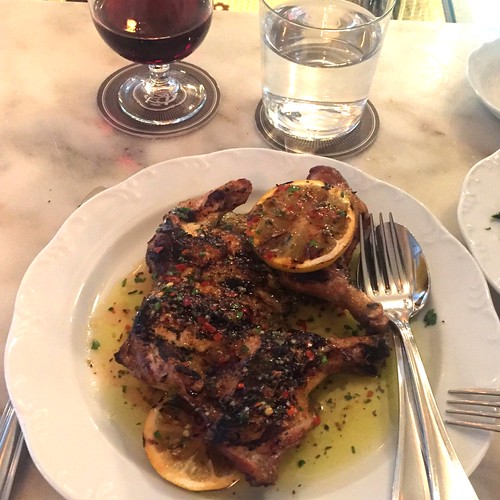 Craftbar with co-workers – delicious burrata, kale (meh) and winter squash salad, duck hearts and dumplings and of course, the oozy pecorino fonduta, my favorite item on the menu 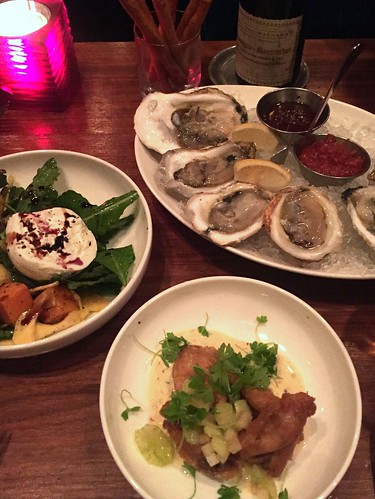 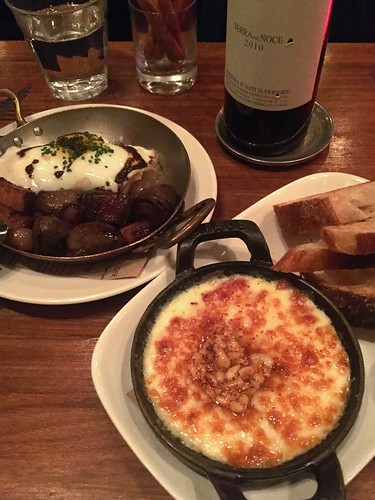 Lunch at old reliable, Charlie Bird – diver scallops with brown butter and Sicilian lemon and mezze paccherie with suckling pig and saffron ragu (and their addictive house-made chili oil). I should probably start trying more new places but am a huge creature of habit. 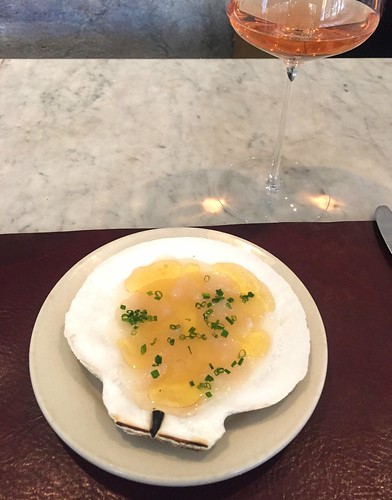 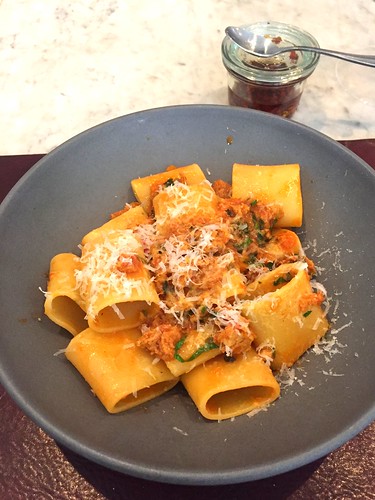 Lunch at Charlie Bird and a Nebbiolo tasting

Started an Italy-centric Sunday at Charlie Bird, conveniently just down the street from my apartment, for lunch with Cindy. Both of us had only ever been there for dinner, when it’s usually packed, bumping with old school hip hop and you have to wait around 30 minutes to get a seat at the bar, but the restaurant was pretty calm when we arrived around 1 pm. We both ordered a Bloody Mary, which unfortunately wasn’t as strong and spicy as I would’ve liked. 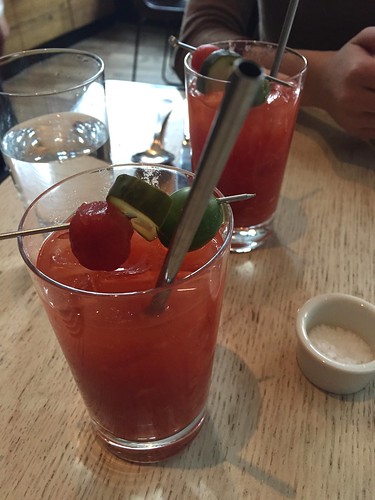 For my main, I stuck with the classic crisply roasted half chicken and herb salad. The portion is always very generous; if you’re a fan of family-style, which I am, you could probably order a pasta dish, this and a side or two to share with another person) and though you can’t see it in the photo, the juicy chicken, which by the way has the most insanely crispy skin ever, is perched atop a huge shmear of rich and creamy chicken liver pate and accompanied by an herb salad that I just forked around for a bit. 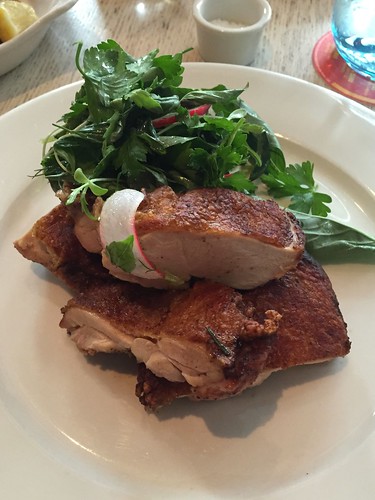 Cindy ordered the poached egg with polenta, charred onions and a duck crackling crumble (!) and we also shared a side of the Roman-style artichokes, nicely seasoned and crispy with a romesco sauce. 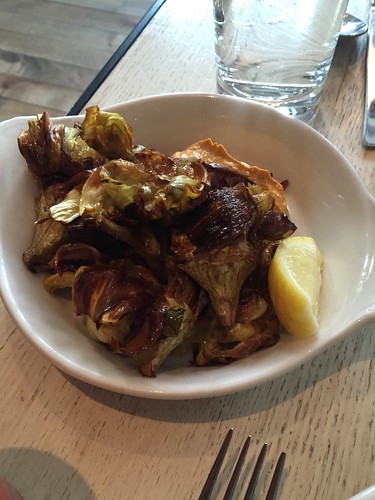 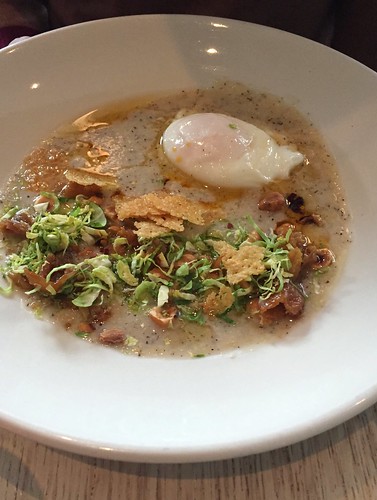 After Charlie Bird, I tried to work off lunch by doing some window shopping in Soho but most of the time was spent fetching things for the evening, a Nebbiolo tasting at Artemis’. Each of us brought a bottle of either Barbaresco or Barolo (nothing younger than 2010) and we went from the youngest wines (which included some surprisingly smooth Barbarescos) to the oldest, including a standout 1985 Ceretto that Chris generously shared with all of us. What started out as a fairly civilized affair eventually devolved, per usual, into a wine-cheese-salumi-pizza 6-hour eating and drinking marathon that ended with us all pretty tipsy and dreading work the next day (compare photo directly below with the last one). A super fun, gluttonous night with a great group of people that led to a somewhat painful Monday morning, especially since yours truly had wisely decided to sign up for a juice cleanse that day. C’est la vie… 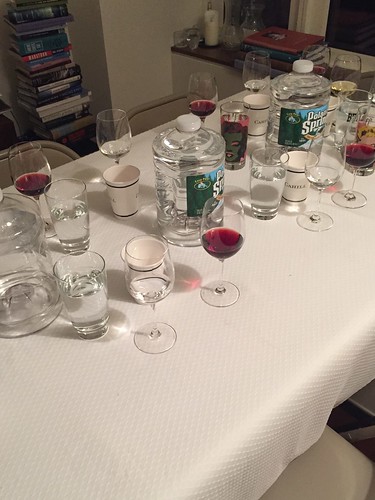 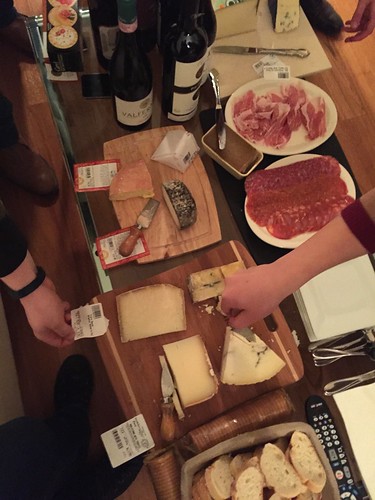 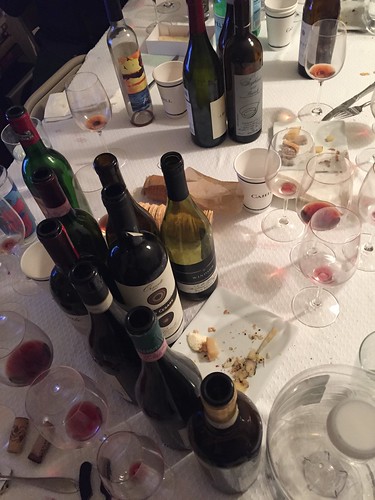 You are currently browsing entries tagged with charlie bird at Notes on Food.