Day 3 in D.C. started off with a leisurely lunch at an old favorite of mine, Hank’s Oyster Bar, in Dupont Circle. Fred and Joanna came down from Bethesda for the day (always so great to catch up with them) and we had ourselves an oyster and seafood feast. Started with a spicy bloody maria with tequila and an enormous assortment of raw oysters that Hank’s had listed on their blackboard. I don’t remember all the different types but Ameya and Fred did insist that we get extra Rappahannock oysters, which turned out to be a good call as they were sweet and buttery with a nice, crisp finish. Awesome. 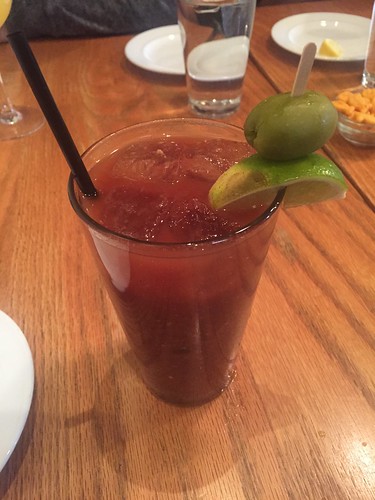 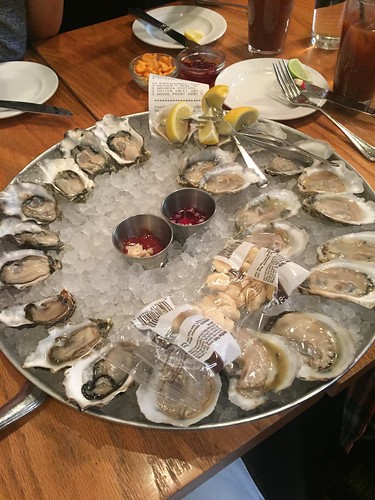 Our other starters were the perfectly fried and well-seasoned popcorn shrimp and calamari with their crack house sauce that’s similar to a spicy remoulade and the BBQ’d oysters, Hog Island style. Lots of buttah, some white wine, garlic and Tabasco made for some scaldingly hot, albeit tasty bites. 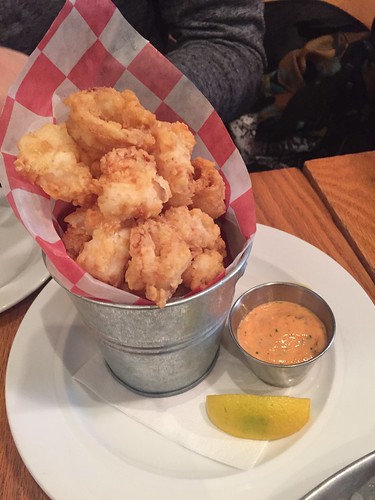 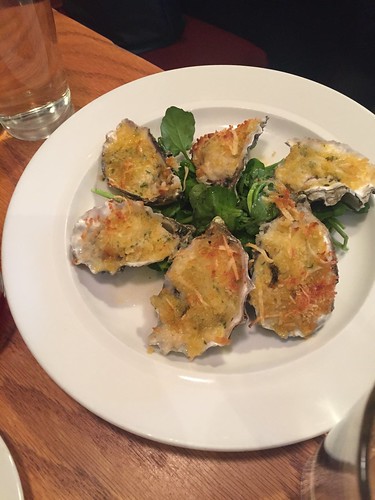 Fred and Joanna shared the shrimp and grits, which looked enormous and delicious, Ameya ordered the smoked trout hash with poached eggs, potatoes and dill cream sauce, which came out smelling amazing and very rich and I tucked into their lobster roll (bursting at the seams with tender lobster meat lightly dressed with mayo and celery, the way I like it) with Old Bay fries. Everything was so fresh and the atmosphere was chill and casual that it just cemented my belief that Hank’s will always be one of my favorite D.C. restaurants. 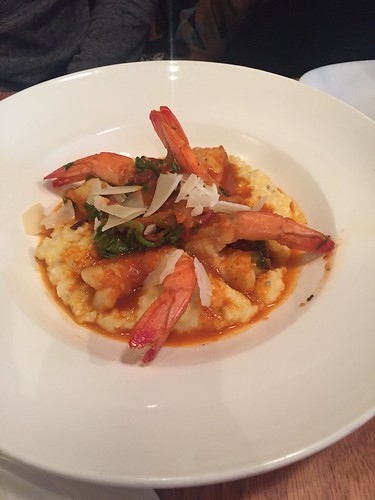 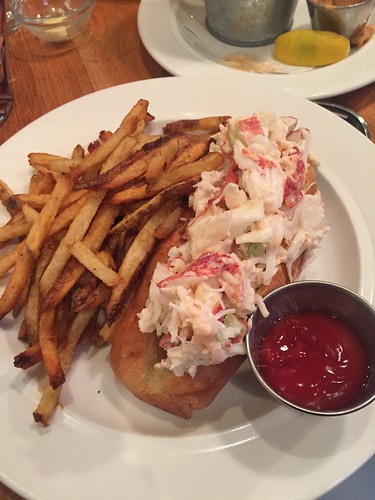 By the time lunch ended, we were feeling pretty full and lethargic, and since the Phillips Collection was only a couple blocks away, I dragged our group to visit the Rothko Room and the Man Ray-Human Equations exhibit so we could get a bit of culture and a good walk in before our evening at new hot spot, Rose’s Luxury. 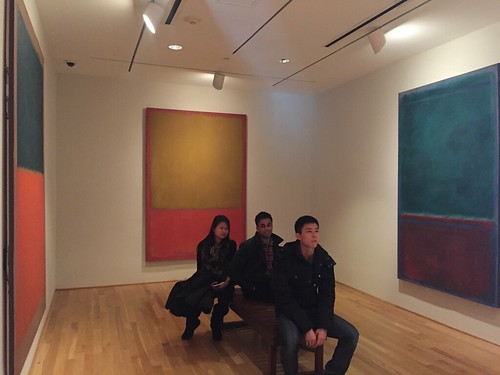 Oh god. It’s really starting to sink in, this whole graduation thing. Even though I am super excited about my plans for next year, a part of me is still coping with the fact that I’ll soon be leaving Georgetown. Goodbye beautiful campus and your ridiculous amount of stairs. Goodbye wonderful M and Wisconsin. Goodbye all the great people I’ve met over the past three years (though in this case, I don’t feel too sad because I know we’ll definitely see each other again soon). Goodbye all those case studies and group presentations I’ve done as part of the business school (honestly, I probably won’t miss you as much).

Of course, I’ve been trying to hit all my favorites spots before leaving for the summer. Last week, friends and I went to Hank’s at Dupont and had our fill of delicious raw oysters from Washington state, fried shrimp and calamari, crabcakes, and lobster rolls. The weather was gorgeous, so for the first time this semester, we were able to eat outside.

Midway through our meal, we saw some White House staffers pull up on their bikes, and I noticed an Indian guy in his helmet and sneaks. Turns out it was none other than Kal Penn, of Harold and Kumar fame, who is currently working at the White House as associate director in the Office of Public Engagement. Actually, a week before, someone had held him at gunpoint before taking his belongings, so it was nice to see he hadn’t been hurt enough to prevent him from going out. The rest of our dinner was spent debating whether or not to take a picture of him, but by the time we finally decided, he had already started eating and we didn’t want to annoy him.

After a week of paper writing and studying for finals, Erin, Jia, and I decided that enough was enough. We couldn’t take campus anymore and went downtown to the capitol, where we treated ourselves to an “end of the semester” dinner at Fogo de Chao, one of those epic Brazilian barbecue places. There’s a salad bar and delicious sides, but the focus of the meal is the beef. You’re given a placard with green on one side and red on the other, and when you leave the green side up, men dressed in funny gaucho pants walk up to your table with cuts of sirloin, ribeye, filet mignon, etc on giant skewers and slice you off a piece according to how you like it cooked. When you’re full and need a break, you turn the placard on the red side.

You’d think that a ton of beef and sides like fried polenta and grilled bananas would fill us up, and it did, but fullness didn’t prevent us from ordering three desserts: turtle cheesecake, a ridiculously rich and moist chocolate molten cake, and classic creamy flan. Afterwards, the three of us all had glazed over looks on our faces and decided that, no matter how painful it was, we’d walk back from the metro station.

The weekend of October 15 I got my LSAT results, and my dad and sister #3, Laura, visited me for parents’ weekend the very next day, which was a nice consolation. Laura had a bunch of extra credit places to visit for her AP US History class, so most of the day was spent traipsing around the DC monuments in the bitterly cold rain, including the Washington Monument, the Korean War and Vietnam War memorials, the Lincoln Memorial, basically everything you could think of.

On the plus side, we got a good amount of seafood at Hank’s. Laura got to try her very first oyster and lobster roll, both of which were as delicious as the first time I had them. But for some reason, I still feel very iffy about the fried oysters; something about their taste changes when they are cooked (they get this really strange bitter taste) and I don’t think I like it very much. I’d rather stick with their raw, deliciously briny and cucumber-y  brothers and sisters. yum. I forgot that the restaurant likes to leave really good dark chocolate as an after-meal snack, but this time, we had a leftover plastic bag from the oyster crackers and scooped up all the pieces to save for later.

While we were out during the day, my roommates Danielle and Quint went on a rearranging rampage. Now, the living room/kitchen space looks so much more open now, and we’ve got a little desk in the nook near the window. I love that there’s an extra light now too; one of the major problems we had before was the dimness of the living room, where most of us like to get work done in the evening.

Considering how much furniture moving we did that night, we held a spontaneous wine and cheese night. The brie and white wine were from dean&deluca (so delicious), and my dad just brought down a bunch of fruit (concord and table grapes, tangerines, bananas) so we had quite the snack. I took the baked brie with honey and walnuts out of the oven while we were still moving things around, and since it stayed on the hot plate for a while, it melted so much more than the first time I made it. It still tasted delicious with the toasted french baguette, though.

My dad’s in DC again this week for a conference in Rockville, MD, and I think tomorrow we’ll be going to the Maine Avenue Fish Market in southwest DC to have some tasty Chesapeake Old Bay Crabs before they go out of season. After that, I’ll be working on law school applications all weekend since deadlines are coming up, but I’m going to do my best to post about the crab dinner and recipes next week!

After staying at a friend’s house in Fairfax on Friday evening, my family and I then drove to Old Town Alexandria to walk around King Street and look at cute antique stores. There was a lot of rain, but in a way, it was a good thing since there were less people walking around town that day. We had a late lunch at Hank’s Oyster Bar, which also has a location at Dupont Circle, much closer to Georgetown campus.

Now, I’d never tried raw oysters before. I don’t even remember if I ever tried them cooked, but when I read Anthony Bourdain’s Kitchen Confidential, I knew that if I was ever given the opportunity, I wouldn’t let it pass me by. Eating raw oysters was one of his food revelation-moments after all. Luckily, my dad happens to really love them, so going with our waiter’s recommendations, we ordered the Kusshi, Steamboat, Bluepoint, and Wildcat; this was one case where he didn’t want to hold back the food. Though all were delicious and wonderfully fresh, the Kusshi stood out and I actually got a bit of that “cucumber finish” that our waiter mentioned. At $2 a piece, they weren’t too expensive, and my dad found out that on Saturdays, you can buy tickets for $65 for all-you-can-eat oysters and all-you-can-drink beers. Needless to say, I wouldn’t be surprised if he just happened to visit me next time during the weekend.

Oh, and this is a beautiful box of mochi that my dad got during his trip to Tokyo. It was gorgeously wrapped, but the box itself was plain white, which is driving me crazy now because I want to know if I can order the same set online and I don’t even know the company name. Anyway, there was a lot of sesame-seed-crusted red bean mochi, some apple and orange, but my favorites by far were the individually wrapped yuzu (yellow) and sakura (pink). Both of them were so floral and not disgustingly sweet, and I just love that sticky rice texture compared to the smooth filling. Sigh. I need more.

You are currently browsing entries tagged with hank’s oyster bar at Notes on Food.