Santina and High Street on Hudson

From a while back: dinner at Santina, right next to the Whitney Museum and the High Line, with Cahill folks and then two separate visits to hit bakery/restaurant High Street on Hudson for dinner and breakfast. Completely different restaurants but great experiences at both (Santina was surprising since I think the Torrisi restaurants tend to be over-priced and too hip for me and generally avoid them).

At Santina, we sat in the atrium outside under heat lamps, which was actually nice and almost felt as if we were outside in the middle of winter. We started with squash carpaccio with honey agrodolce – my favorite dish of the nice and completely new. The squash was thinly sliced and tasted almost as if it was bruleed, a wonderful mix of textures and savory against sweet. 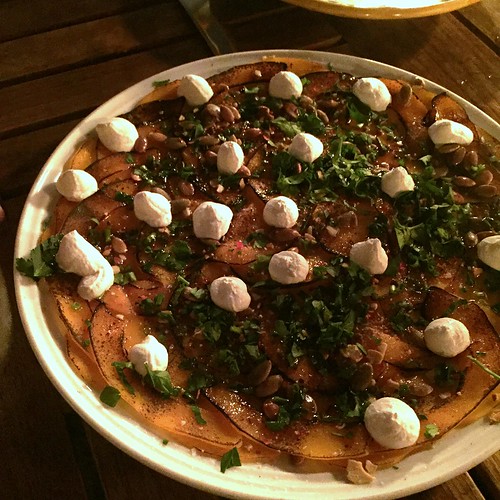 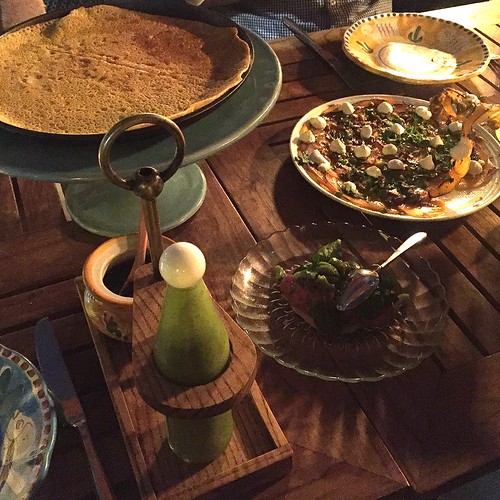 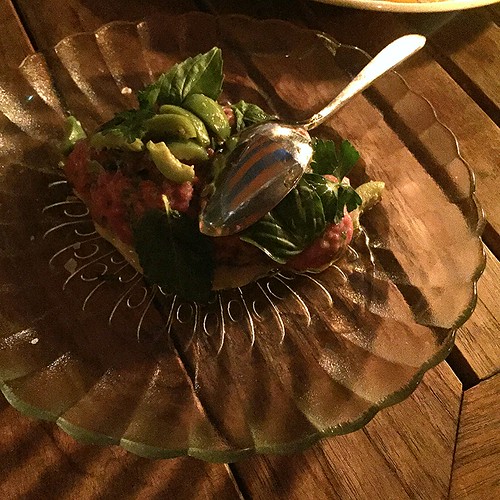 Family-style mains – rice of guanciale e pepe, spaghetti with blue crab with tomato and chili, lobster catalan with garlic and anchovy butter, grilled lamb chops, spicy fried potatoes. The rice was underwhelming and didn’t pack as much flavor as one would hope but the spaghetti stood out with its bright and briny notes. In the end, I was happy to try Santina but don’t think I would ever choose to go again given all the great restaurants constantly popping up in the neighborhood (as well as all of my time-tested favorites). 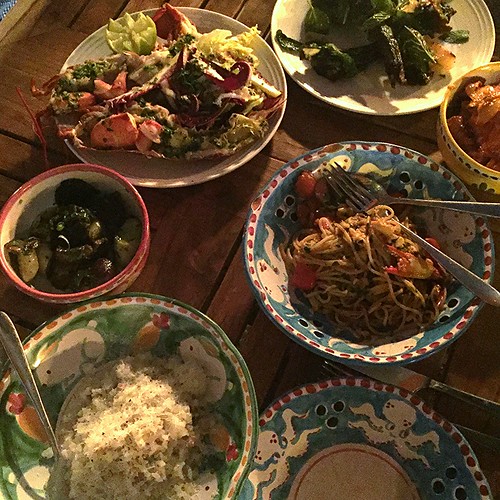 Turning to a totally different restaurant – High Street on Hudson. The original location is in Philly and ever since the owners announced that they were opening a NYC version, it’s gotten a lot of press and well-deserved love. Artemis, Cindy and I went for dinner during the week not too long after they opened and it was packed. We started with an addictive dark bread called vollkornbrot with creamy charred rutabaga hummus and long hot chermoula and black sesame oil and perfect, crispy fried razor clams with habanero buttermilk, which made me wish for summer. 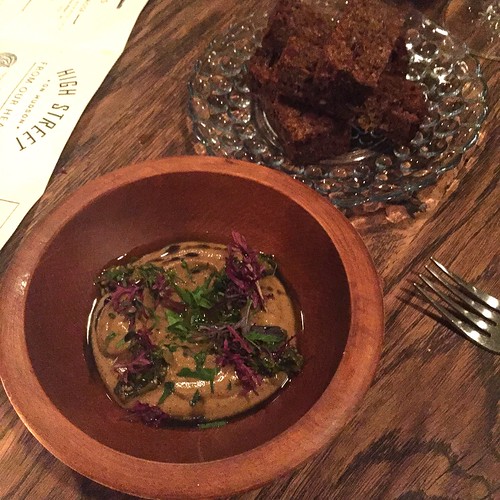 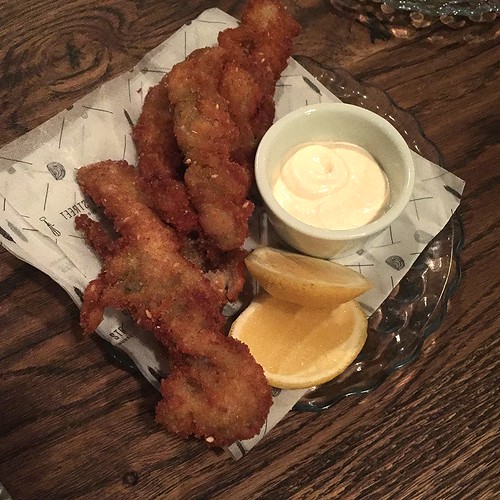 Next, another (and in my opinion, superior) lamb tartare with burnt celery root, sunflower, cultured cashew and malted rye and tripe diavola with sunchoke and grilled cucumber (kind of an oddly textured element that I wasn’t crazy for). Both absolutely gorgeous on the plate and wolfed down within seconds. 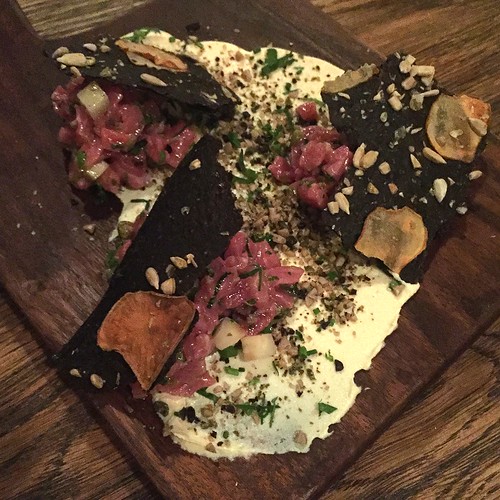 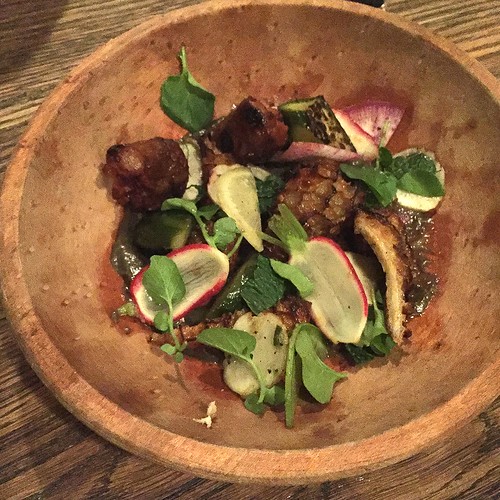 Highlights of the meal were the main courses of seawood bucatini with njuda, lobster bottarga and breadcrumbs and Happy Valley beef with sweet potato and fermented broccoli. Stellar examples of dishes from the earth and sea…I was in such a happy place by the time our dinner came to a close. 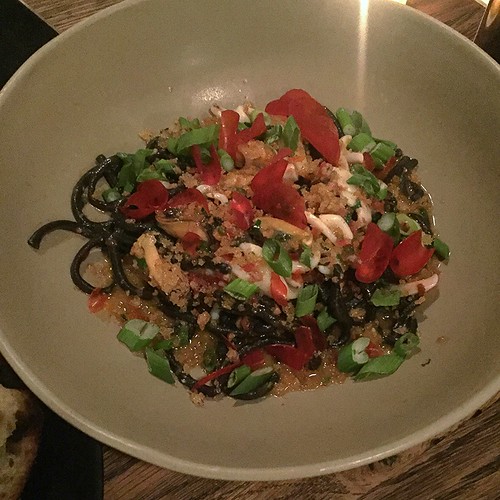 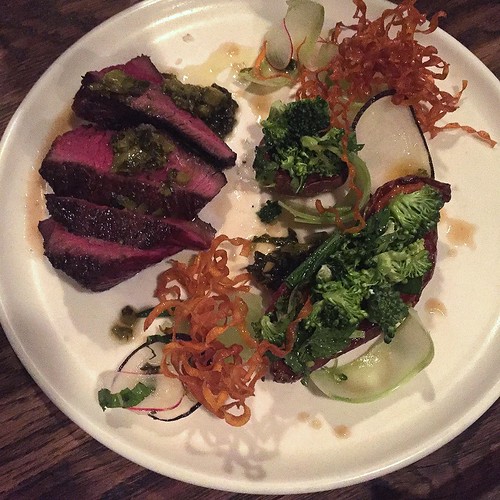 And for good measure, Cindy and I went back to High Street not long after for breakfast to try their super-hyped sandwiches and they did not disappoint. We got the bread basket (so ambitious), the bodega sandwich of malted breakfast sausage, egg and aged cheddar on a giant sage-black pepper biscuit about the size of my head and old bay fried potatoes that I kept popping into my mouth even after I felt completely stuffed. I don’t think I ate another meal for the rest of the day but it was completely worth it. 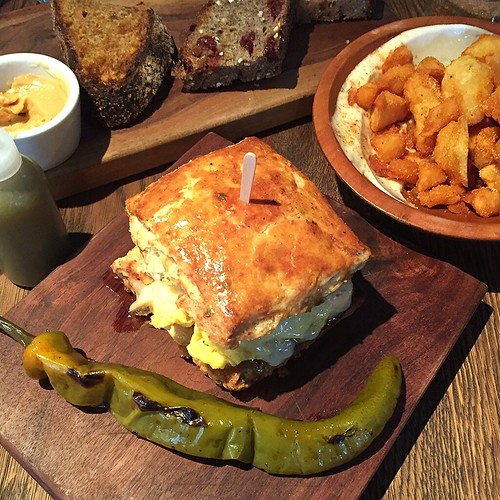 You are currently browsing entries tagged with santina at Notes on Food.