Sometime in August, Cindy and I had a date at newly opened restaurant, The Clocktower, by Stephen Starr.  It’s located in EDITION Hotel right by Madison Square Park and helmed by Michelin-starred chef Jason Atherton, who leans toward seasonally-inspired (though it seems like no one intentionally does out-of-season cooking these days anyway) contemporary food with British influences.  You enter the dimly lit hotel lobby and then go up a flight of stairs, leading to three different dining rooms, a billiards room and a room with a bar, all sumptuously decorated with works of art covering almost every inch of the walls. This is definitely a great place to bring a date – it looks super fancy and might seem a bit stuffy at first, but the service is warm and very helpful when you ask them for recommendations (food or wine).

We started with some bread, right out of the oven, and cultured butter, a hand chopped steak tartare au poivre with roasted bone marrow, sourdough, pickled artichokes and mustard leaves (nicely balanced with fattiness from the marrow and zing from the pickles) and finally, uni risotto with peekytoe carb and bottarga. The dishes were all well executed and I fell in love with the uni risotto – comforting and luxurious but not too heavy for a starter. I could have maybe used a different textural element (some crunch on top?) and slightly more seasoning but that’s mainly me just being a little nitpicky. 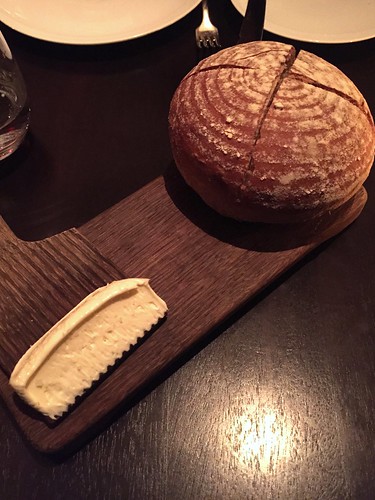 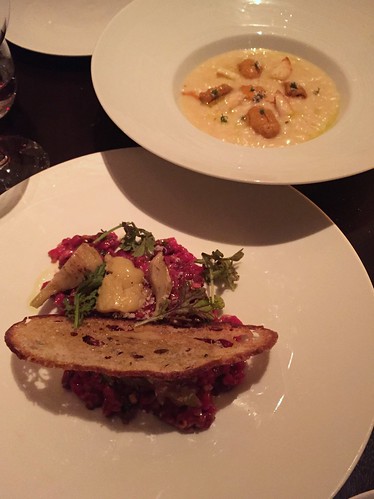 For her main, Cindy ordered the beef wellington with carrots and potatoes gratin, which looked absolutely amazing and a nice medium-rare, and I got the classic Long Island duck with sauce l’ orange, fennel, endive and salt baked turnips. These were pretty substantial portions and I liked that the sauce in my dish was not overly sweet, which can often happen with orange sauce, and the breast pieces were perfectly cooked for my taste. All of this washed down with a round of cocktails and then a bottle of smoky red wine, and Cindy and I were happy campers, ready to walk all the back to the Village from Madison Square Park. 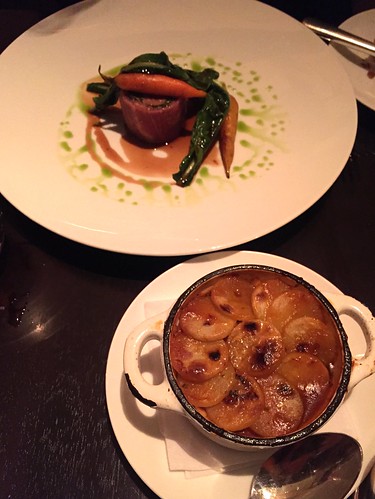 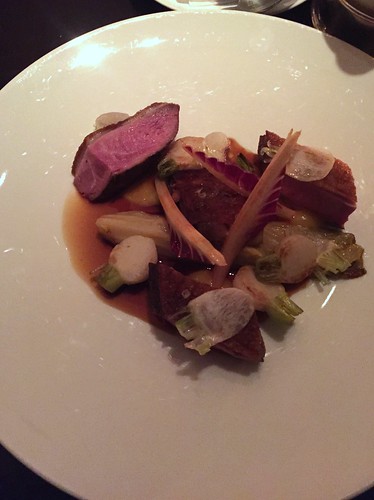 Had a fun girls’ dinner at the relatively new Upland right off Park Avenue a while back and got to tuck into some Italian-influenced food with a California twist. Initially, I was a bit apprehensive because my co-worker Artemis went right after their New York Times review had come out and she ended up unimpressed, but based on our experience, it could have been attributed to them still working out the kinks so shortly after opening. I didn’t get any great shots of the interior but the restaurant itself is very spacious, follows the recent trend of having more banquettes than stand alone tables (meaning more room per group, always a plus) and houses shelves and shelves of bottles of olive oil or jars of preserved lemons glowing prettily in the dim lighting.

Our first starter were the crispy duck wings with lemon, olive oil and yuzu kosho, this funky Japanese fermented paste of chili peppers, yuzu peel and salt, which kind of hit you over the head with their spice and tang. Really delicious and intriguing since I also don’t think I’d ever had duck wings before. We got the much-hyped estrella (long tubular pasta stars perfect for picking up sauce) with creamy chicken liver, sherry, rosemary and sage and the delicious pappardelle with spicy pork sausage, kale and parmigiano, all giving great first impressions. Also would point out that chef Justin Smillie even pays close attention to the bread and butter, which is just-out-of-the-oven toasted sprinkled with coarse salt and the butter is room temperature with a smattering of chives and a smidge more salt. It’s little details like this that count, people. 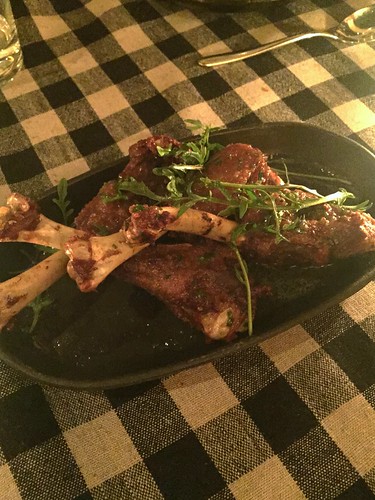 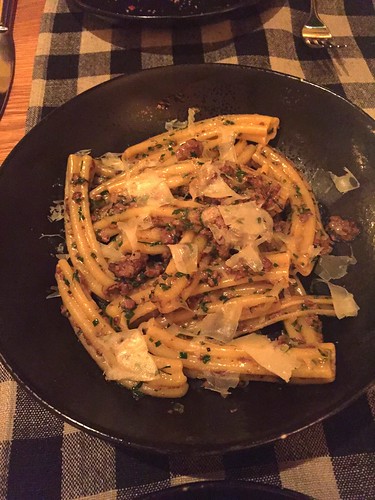 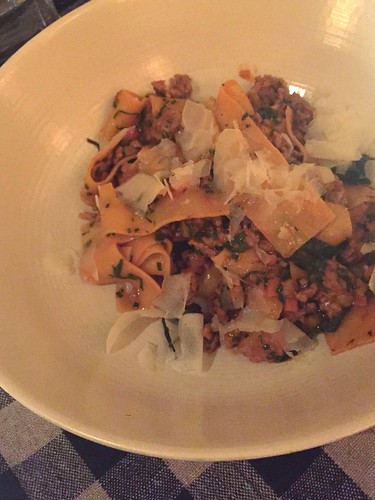 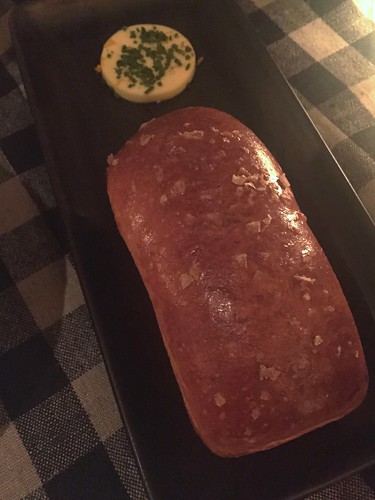 For my main, I ordered the crackling porcelet, an interesting cut, accompanied by jimmy nardello peppers, charred onions and permission. A nice balance between savory and sweet from the fruit, this came in a pretty large portion and turned out to be quite rich thanks to that crunchy, slightly fatty strip of pork crackling running along the right side, though honestly, I had no problem finishing. The other entrees looked amazing as well – a very colorful cioppino with a melange of shellfish and striped bass and a whole grilled branzino with citrus scallion vinaigrette. We also ordered a side of the slow roasted celeriac with black truffle butter and sea salt (because, you know, vegetables) which was earthy and surprisingly light given that I’m pretty sure it came out doused in butter or olive oil. 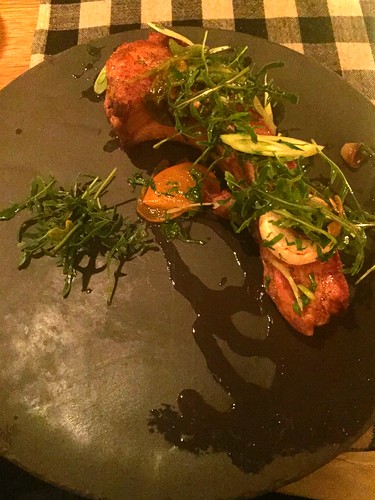 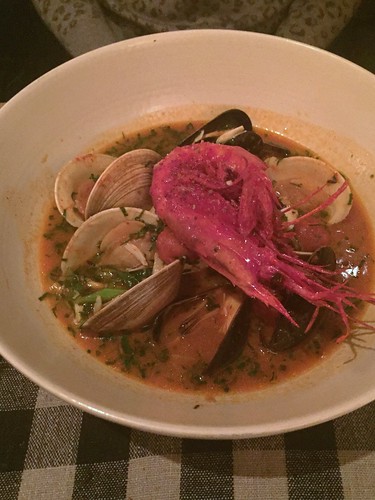 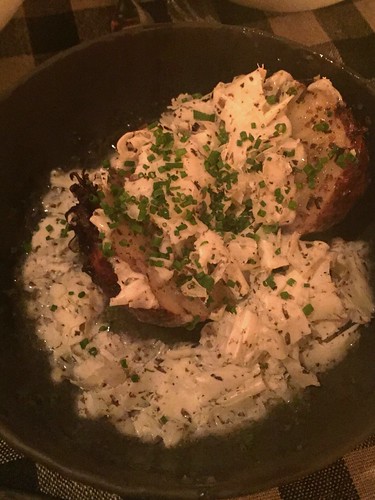 After a break between courses, we ended our meal with a solid, though not particularly interesting, apple tart and some kind of caramel custard with devil’s food cake and ginger ice cream, which I could only take one bite of since it was too sweet for me.

While I don’t think I’d necessarily revisit Upland that frequently (the food and service were good but I think some places further downtown and closer to my apartment that I’ve recently visited have been more memorable), I’m definitely glad we went, despite hearing some mixed reviews, and our group had a great time. This place would be really fun for birthdays or special occasions with larger groups so you can order a lot of different menu items. 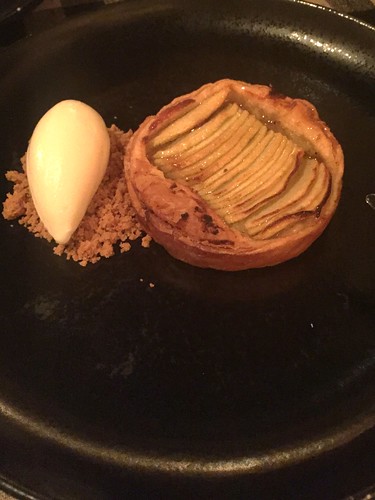 You are currently browsing entries tagged with stephen starr at Notes on Food.