We just got about two feet of snow dumped on us here in NYC. Everything is currently coated in beautiful, fresh white powder and I felt like a little kid walking through the streets last night but since I know it’ll all turn disgusting, grey and slushy in no time, here’s another California post.

Hog Island Oyster Co. at the Ferry Building Marketplace: Artemis kept mentioning how she visits this place every time she makes a trip out to San Francisco and since I didn’t think I’d be able to go to Swan Depot, another famous seafood place, I decided to go to Hog Island for an early solo lunch at one of their counters during my second day. Started with some bubbles and their raw bar mix of five oysters. I quickly became addicted to their mignonette with cilantro and jalapeno and ended up ordering another half dozen at the end of my meal for dessert (again, not much of a sweet tooth). 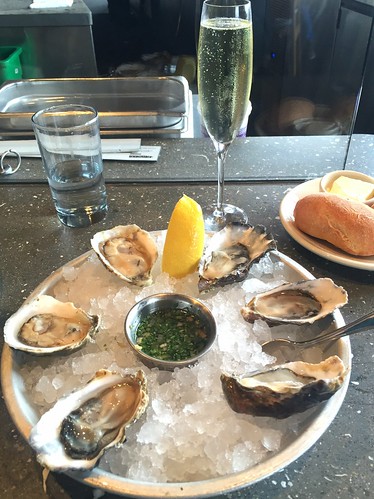 I tried to be good and ordered their shaved brussels sprouts salad with pomegranate, bacon (OK, maybe not that good) and mustard dressing as well as two chipotle bourbon grilled oysters and two miso grilled oysters. So frikkin’ hot but worth burning my mouth for. I think the chipotle bourbon version was my favorite of the two and, given that broiled/grilled oysters tend to be pretty hard to pull off (so easy to overcook them) and these were perfectly cooked,  I was pretty effin’ happy. Also, towards the end of my meal, I saw Top Chef winner Michael Voltaggio chilling at the opposite end of the bar shooting the shit with the chefs and sampling a bunch of their crudo dishes, so next time, will definitely have to try those as well. 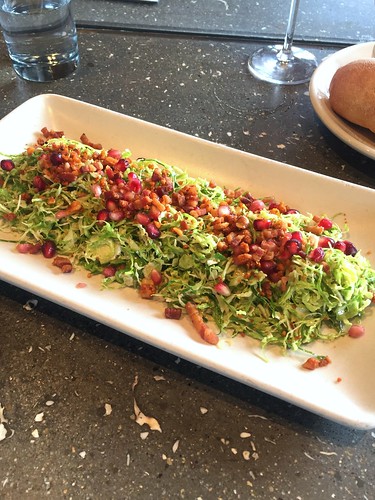 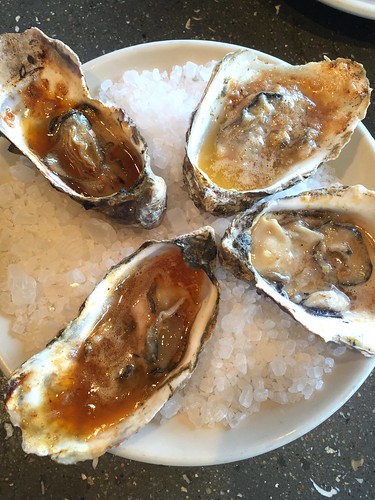 I spent the rest of the afternoon wandering around and eventually made my way to the Mission. The line outside Bi-Rite Creamery actually wasn’t that long (maybe 10 minutes) so I figured I might as well see if it lived up to the fuss. Got a scoop of their strawberry balsamic, which was fine but didn’t pack as much balsamic punch as I would’ve thought, and the ricanelas (snickerdoodle/cinnamon) that I basically went batshit nuts for. Snickerdoodles always remind me of middle school, where at lunch we’d try to find ones that were barely baked and essentially still cookie dough. While I was enjoying my ice cream, I saw a kid drop his cone on the floor and proceed to have the most amazing, dramatic temper tantrum ever and all I could think was, “I feel you, bro.” 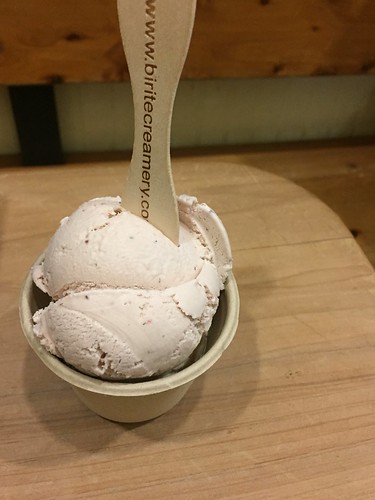 Admittedly though, I’d had a slight freak-out of my own earlier that morning when my high school friend Shirdoo messaged and said he’d no longer be able to make the 7:30 p.m. reservation at Quince that we’d made because he’d missed his flight from Austin (missing flights is apparently not an uncommon thing for him to do). After calming down (I was REALLY looking forward to going to Quince) and looking through OpenTable, I saw that Michael Mina actually had 9:45 p.m. reservations available for that day so it worked out fine.

The restaurant was spacious and beautifully decorated, though we noticed that we were definitely the youngest guests by far (and probably also the most casually dressed). We started with a glass of Bruinart rose champagne and decided to go all out and order the tasting menu and wine pairing, even though it meant we’d probably be finishing up around 1:30 a.m. Some amuses bouches to start…I don’t remember what any of them were though. 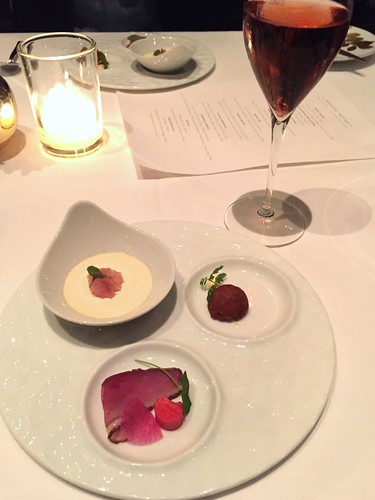 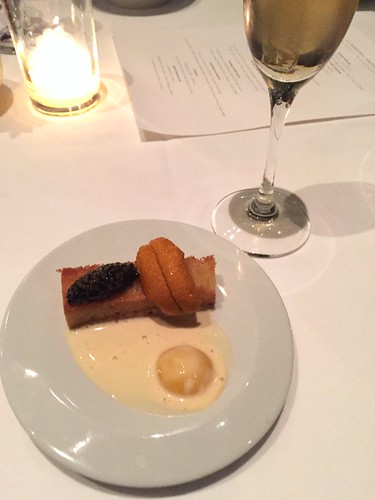 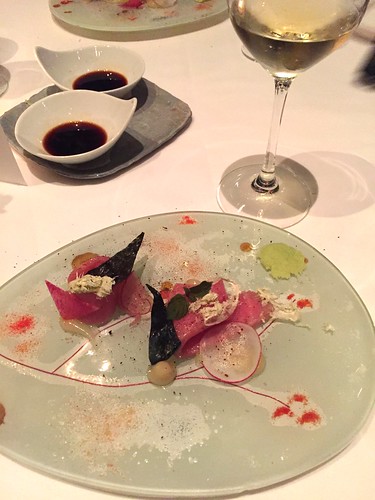 Cedar grilled sanma, a type of mackerel, with daikon and yuzu kosho paired with 2014 Andrea Felici Verdicchio dei Castelli di Jesi from Marche, Italy. This was actually one of my favorite dishes. Mackerel is a pretty underrated fish and grilled this way, it was super tender and flavorful and the yuzu kosho added some extra umami. 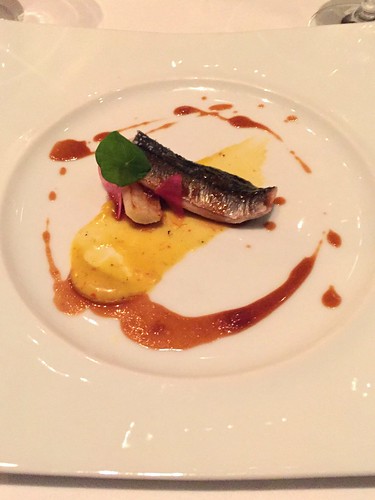 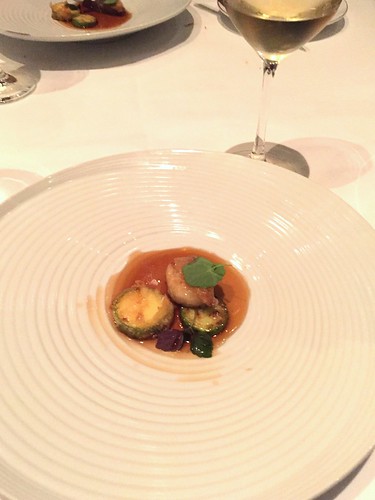 Black cod, matsutake, watermelon radish paired with 2009 Domaine de Saint Just Chenin Blanc from Loire Valley. At this point, I don’t know if it’s because the wine started getting to us (the pairings were pretty generous) or he’s just super clumsy but Shirdoo actually dropped his phone in his bowl of cod while taking a photo, which earned some chuckles from the staff. 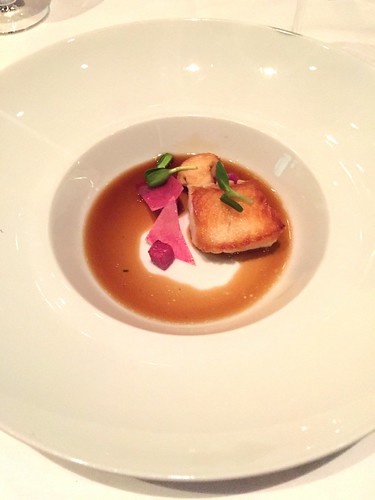 Gluttony on a plate – Maine lobster, foie gras, butternut squash, misome and truffle broth paired with 2013 Halleck “Three Sons Cuvee” Pinot Noir from Sonoma. Goddamn this dish was good. Generous portion of foie and beautifully cooked lobster. The colors were absolutely gorgeous as well..sometimes you can’t get too much of a good thing. 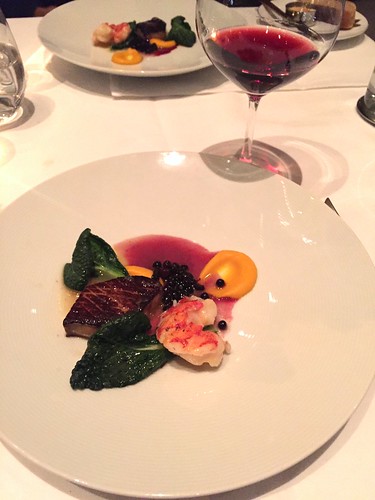 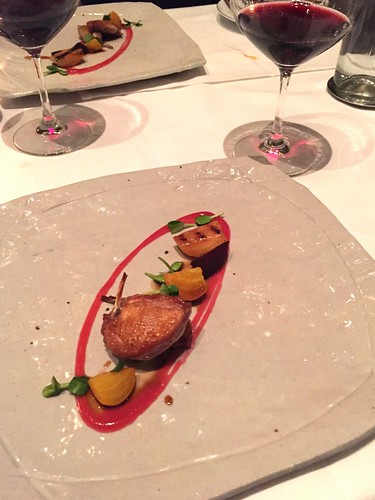 Japanese wagyu, salsify, maitake, hazelnut, sansho pepper paired with 2006 Serafini & Vidotto “Il Rosso della’Abazia” Bordeaux blend from Veneto, Italy. Really dug this dish and its beautiful earthiness. Beef was well-seasoned and a nice medium rare and the other elements were nicely balanced. I was getting pretty full at this point but had no problem finishing this dish. 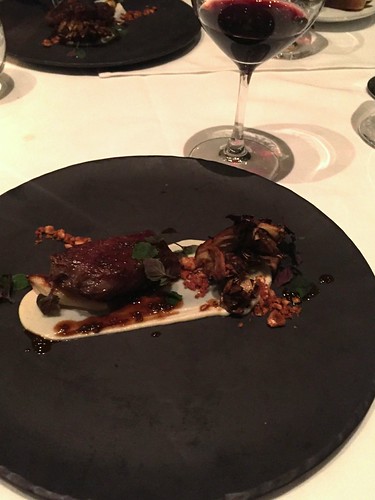 Quince (hah), brown butter and lemon with 2010 Halter Ranch vin de Paille from Paso Robles. This veered on the too-sweet side for me so I could only take a couple bites, but I had a good time sipping the pairing. Our last course was a dark chocolate cake, cinnamon and apple paired with 2008 Kiraludvar “Cuvee Ilon” Tokaji but at that point I’d given up eating any more or taking photos and was just sitting in a fuzzy, happy daze.

We finally finished our meal around 1:30 in the morning and were the last people in the restaurant (though credit to the amazing, attentive and friendly staff as they never tried to rush us in any way and really made sure that we enjoyed ourselves throughout the meal) by the time we left. All in all, if you’re looking to splurge for a special occasion, I’d definitely recommend Michael Mina. 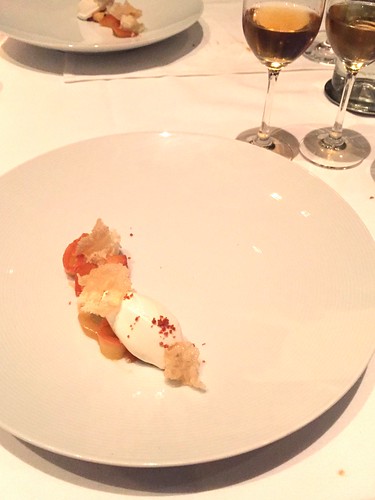 You are currently browsing entries tagged with tasting menus at Notes on Food.