Solo Dining at the Bar

I’m a huge fan of solo bar dining when I get a lazy and quiet Saturday or Sunday. Some people are tentative about dining alone but it can be really enjoyable to take some time to oneself with a good book or even your phone. Usually, I try to go to a restaurant during off hours, around 3pm (assuming the restaurant remains open between lunch and dinner service), so I can take up my little slice of the bar and chat with the bartender or other patrons without having to yell. Below are some places I’ve gone to recently where I really enjoyed my experience: 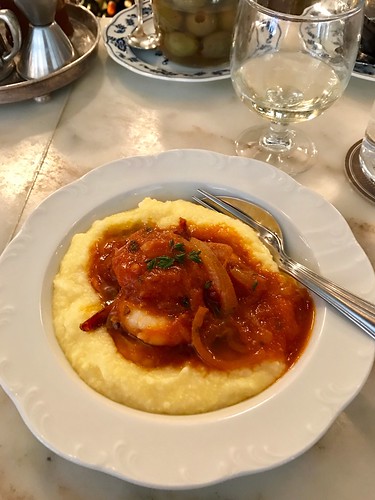 Aquagrill: Oysters and littlenecks with house cocktail sauce, horseradish and mignonette. This place has been open for 20+ years and tends to get pretty packed during prime lunch, brunch and dinner hours but around 3pm, you can usually snag a seat. My usual approach is ordering 6 west coast and 6 east oysters – I leave the particular details to the awesome shuckers – and then some sparkling white wine and maybe french fries on the side. 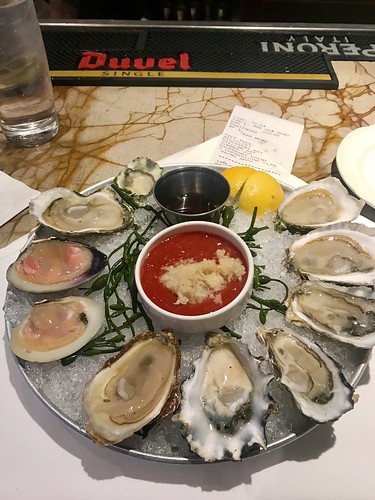 Union Square Cafe 2.0: The new space is gorgeous and definitely evocative of the original. Service was, as expected, incredibly friendly, and I really enjoyed my spontaneous lunch here when I took a day off. There’s a small bar on one of the upper levels as well so will definitely want to go back and get a seat there next time. 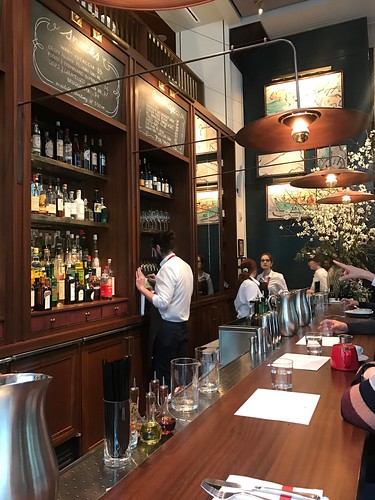 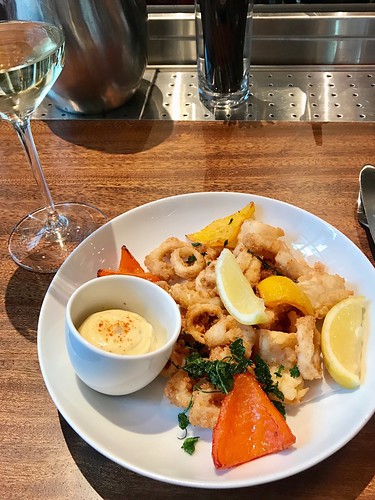 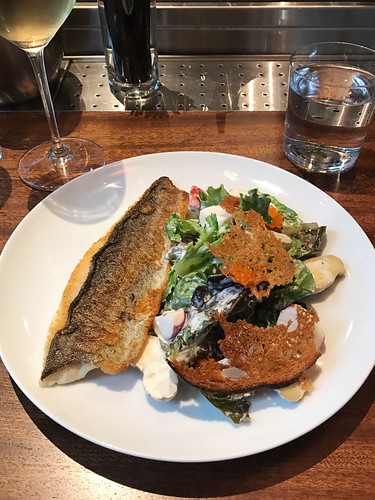 Babbo: I came here for an early dinner after skipping lunch. Vibe at the bar is super casual and low-key even though the food is a bit more high end than Mario Batali and Joe Bastianich’s more casual places in the neighborhood like Lupa and OTTO. Here, a fantastic roasted butternut squash with goat cheese and black truffle honey that was the right balance of sweet and savory. 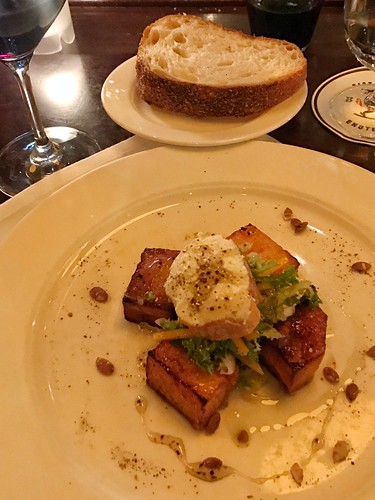 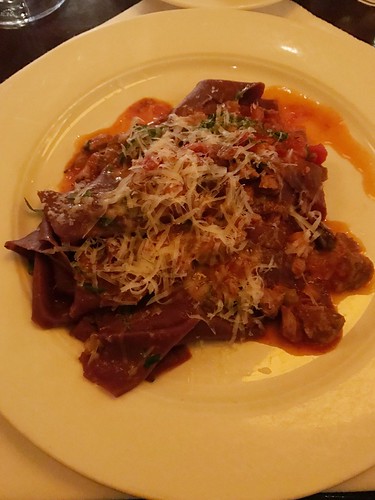 Augustine: There’s been a lot of hype surrounding this place (it’s Keith McNally’s most recent restaurant) but have to say the food and the ambiance lived up to expectations. It really does feel like you’re in an old school Parisian bistro (also…the way to the bathroom takes you through the incredibly beautiful Beekman Hotel lobby that’s perfect Instagram fodder) and my cheese souffle with cave-aged gruyere and parmesan and horseradish fondue was absolutely insane. Rich and cloud light at the same time. 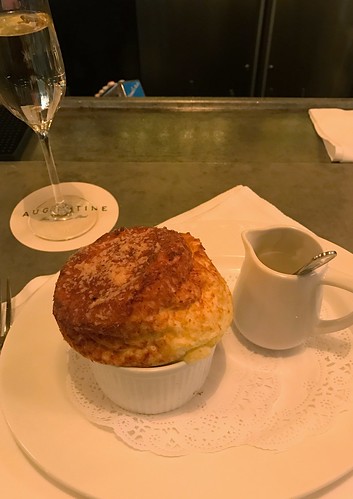 I also ordered the sea urchin spaghettini with king crab and pickled jalapenos with my main and they did not skimp on the ingredients. So damned good, and at 3:30p on a Wednesday, so quiet compared to what I’m sure is a madhouse on a Friday night! 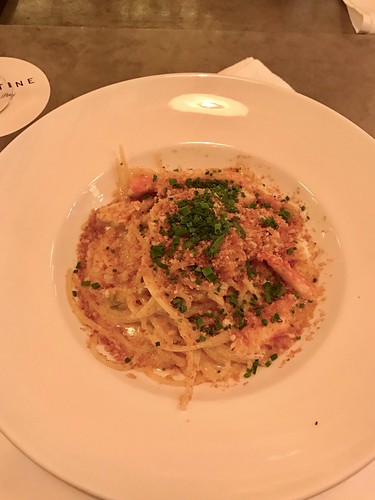 The lobby inside the Beekman Hotel 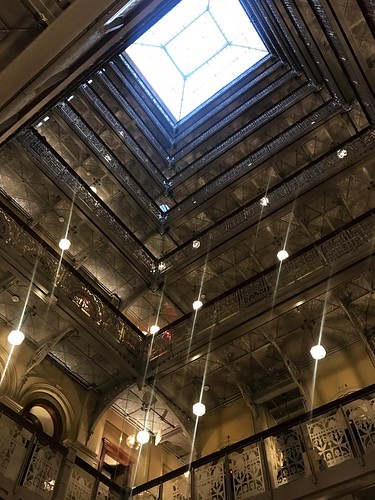 Finally, the NoMad Hotel: Excellent cocktails and a sandwich version of their famous roasted chicken dish, with black truffle and foie gras on brioche and a side salad (because I guess you need some green every once in a while). The cocktail was called the Start Me Up, a super tasty concoction of bourbon, rum, strega, honey, ginger, lemon bitters. A great Saturday afternoon. 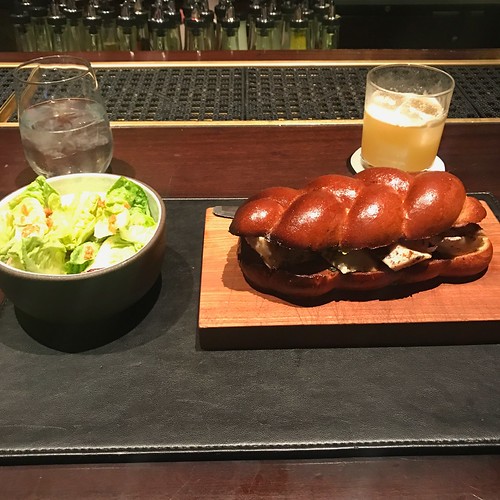 So even if you’re tentative about dining alone at the bar, I really do think it’s one of the most relaxing and stress-releasing things you can do for yourself. It’s probably easiest to go to a restaurant you’re already familiar with so you feel comfortable and just remember to bring a good book (or your iPad) and open yourself up to conversation with the bartenders or other customers. Sometimes you meeting really fascinating people!

Artemis and I took advantage of the BYOB offer at Union Square Cafe during one of the several snow storms that pummeled NYC this winter: fried calamari with spicy anchovy mayonnaise and chicken liver crostini with shaved brussels sprouts salad; Berkshire pork with winter squash and polenta, the winter beef entree and a side of broccoli rabe; two bottles of Italian red 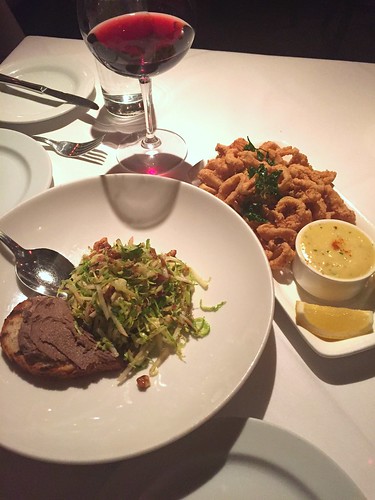 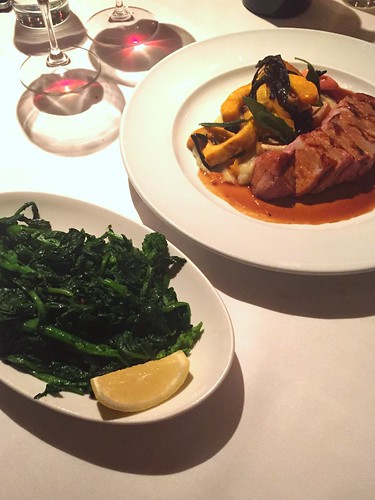 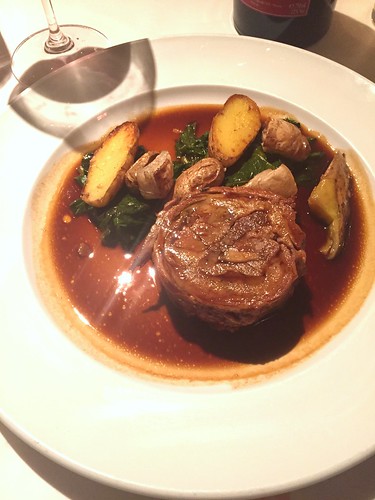 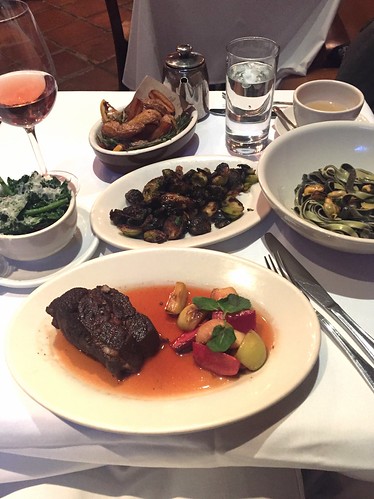 Catching up with Hussam over the braised beef tongue tacos at Empellon Taqueria, another one of my go-to’s in the Village: 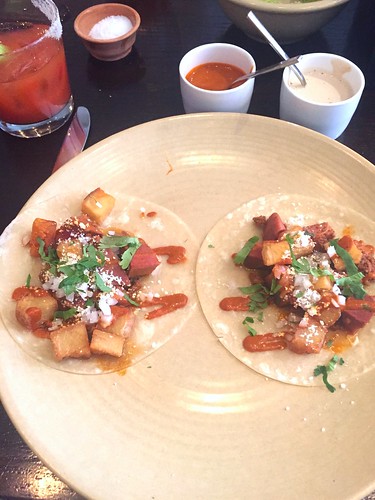 Galentine’s Day dinner of linguine alle noci and eggplant involtini with a dessert of Molly’s Cupcakes courtesy of Alice: 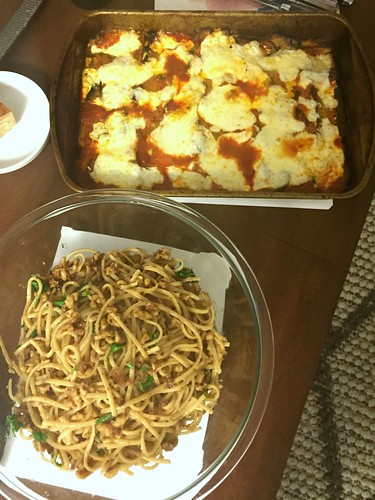 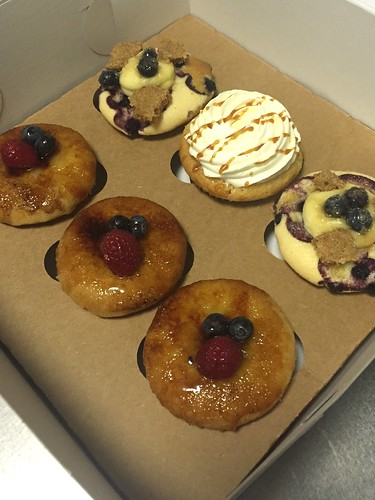 Snow day lunch with Laura at Do Hwa: seafood dolsot bibimbap and the daeji bulgogi with watercress salad 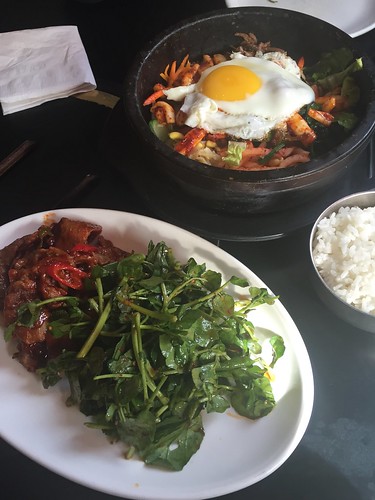 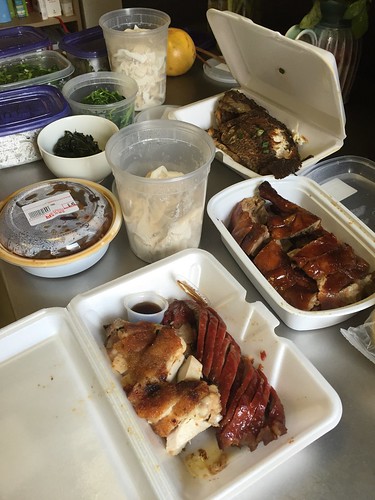 Nora, my supervisor (Best boss ever! Wait ’til you hear what she gave me as a goodbye gift), and I originally planned to go toUnion Square Cafe during Restaurant Week, but plans fell through last minute and we never went through with our reservation. It was still the one place I wanted to eat at before the summer was over and I had to go back to Georgetown, so when an old high school friend, Lorenzo, offered to treat me to anywhere I wanted Tuesday…the choice was pretty damn easy.

Let me just say one thing about my friend before I move onto the food. I bumped into Lorenzo again in mid July, when I got onto a PATH train and he shoved his hand in my face as a way of saying hi. Turned out that our internships were located only a couple blocks apart. And even though he makes fun of me all the time and constantly causes my face to look like this -__- , he’s a good person, but that should already be obvious since he paid for lunch.

Anyway, we got to USC at 12 when it was still relatively quiet and were led up these narrow stairs to a small balcony, second floor area where there were only a couple tables. Our waiter was particularly friendly and leapt into service by raving about the day’s specials, but for appetizers, we stuck with the popular and safe fried calamari and spicy anchovy mayonnaise. I think it’s a problem I have, the tendency for me to order whatever deep fried foods there are on an appetizer menu.

First, ambience. Lorenzo had an issue with the nudes on the wall opposite us (What is it with men and bare breasts!? It’s just art!) but when the bread and butter came out, our attention fell on the food. All I can say is USC passed my simple test when the butter was smooth and creamy enough to smear all over that carb-y deliciousness.

The calamari was so LIGHT considering it’s deep fried in batter and then dipped in mayonnaise. It was one of the top, if not the best fried dishes I’ve had. I didn’t really care much for the mayo, it was too thick and didn’t stick well enough to the squid for my taste, but the fritters were seasoned well enough that the lack of sauce didn’t matter.

Our entrees were a refined tuna salad sandwich with garlic potato chips and housemade pappardelle with braised rabbit ragu. I loved my pasta dish. It may not sound like anything particularly spectacular (except maybe the rabbit part), but the simplicity of this dish caused all the elements to stand out. The pasta had a wonderful smooth texture with a slight bite that I loved and the sauce of braised rabbit featured beautifully tender meat and tanginess from the tomato that just made my stomach sigh. =)

I didn’t try the sandwich, but honestly, all I could focus on was the huge mound of garlic potato chips. I snagged a bite and CRRUUUUNCH. More fried, salted goodness. Plus garlic! Ah…all was right with the world.

Our perky waiter saved dessert from becoming a disappointment. Originally, I was leaning towards the Venetian fritelle, but he said, “Um…the customers who order it usually are let down.” But when I asked about the flourless chocolate cake, he unrestrainedly said, “OHMYGOSH MILLION TIMES BETTER!” So what could I do? Plus…chocolate was involved. Oh, and Lorenzo ordered a banana tart with ice cream and brittle.

The chocolate cake was the moistest, richest concoction ever. I was gushing about it the entire time; the coffee zabaglione served next to it helped to cut a bit of the richness. I don’t know how, but it did for me. Bitter vs. sweet, light and airy vs. rich and creamy. GAH. Lorenzo’s tart was a bit too caramelly and sweet for me, but the honey-vanilla ice cream was wonderful. I have a thing for honey ice cream lately. Whenever I go to Haagen Dazs now I order the Honey Vanilla. Long live the Honey Bees!

It was a wonderful way for the beginning of the end. After twelve weeks, my internship in New York was ending (well, it ended yesterday) and I was getting ready to go back to school. Time for goodbyes and email exchanges.

You are currently browsing entries tagged with union square cafe at Notes on Food.