A first look at the new West Village, Italian-French bistro-esque eatery by Jody Williams of Buvette and Rita Sodi of I Sodi. The new place is definitely much roomier than Buvette, except they crammed as many tables into the space as they possibly could, and though the fluorescent lighting is a bit strange, the food, friendly and attentive service and casual, neighborhood atmosphere more than make up for it. We started with a bottle of reasonably priced, toasty and surprisingly, slightly funky, Montepulciano, the black kale + pork sausage (always good to get some roughage) and winter vegetable lasagna, which tasted like a delicious cross between a potato gratin and a lasagna and really hit the spot for a cooler night. 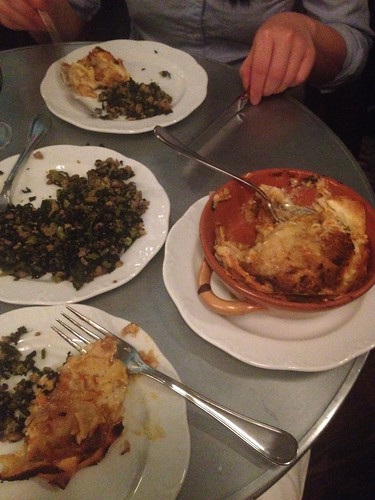 On the mains, we’d already heard great things about the chopped steak, or svizzerina, which Grub Street described as a bunless burger, but it seemed to both of us to be more like a beautifully seared beef tartare, basted in softened garlic (which you can also rub all over the grilled bread that comes to the table), rosemary and olive oil. Pure, unadulterated beef flavor and definitely straight up rare on the inside (as a warning to those who are a bit on the squeamish side). My mussels over grilled bread were just this side of over-salted but again, exactly what I was craving from the brisk weather. Comforting, saucy and a great balance of sweet and acid over lovely charred crusty bread. It was also refreshing to see that the entrees were decent sized portions and from what I remember of the menu, all under $20 (more in the $15-$16 range). I will definitely be going back to sample more of the pastas, vegetable dishes and a fried rabbit that looks ridiculously tasty. 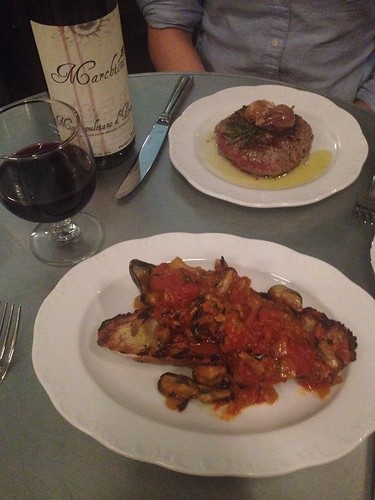 Mussels with tomato, oregano and grilled bread; chopped steak and a bottle of Montepulciano

There’s no website for Via Carota (53 Grove Street between Bleecker and 7th Avenue) just yet and they don’t take reservations, but if you happen to be walking around the West Village on a cold winter night, it’s a great place to stop by, sit at the bar, order a couple dishes and just dig in.

You are currently reading Via Carota at Notes on Food.