Chances for me to cook are pretty rare (even though I love it and find it very relaxing and rewarding), but with a slower work schedule in August and September, Katie and I began to ramp up our time in the kitchen. Since she works at the Sunday greenmarket right in front of the Museum of Natural History almost every week, we thought it’d be nice to focus on using whatever produce she’d brought home that day and supplement it with whatever we picked up at the grocery store or already had in our pantry.

Below is a dish from one of our first dinners, which featured the sweetest summer corn, cherry tomatoes and aromatic basil. Barely even a recipe, I started with a healthy glug of olive oil over medium-high heat and fried some whole smashed garlic cloves to impart their flavor without having any actual chunks of garlic (hate biting into a super pungent bit of garlic). Fished them out after they turned golden and crisp on the edges and then added halved grape tomatoes and sautéed them in the oil on high heat until they started browning and bursting. Next came the corn until it too had some color, salt and pepper to taste (with red pepper flakes because I like the heat, maybe a pinch of sugar to boost the sweetness of the corn) and that was a basic sauce. 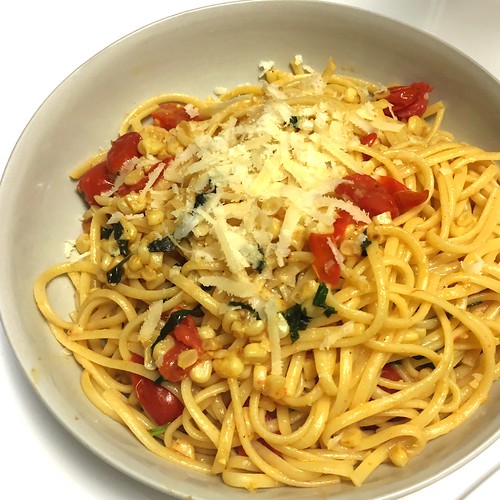 After cooking the linguine a minute or so shy of package instructions (it continues cooking when tossed in the sauce), I added the pasta to the corn tomato mixture and about a cup of starchy pasta water to add a little bit of body since it was on the drier side. Mixed everything together some more with a healthy heaping of grated parmesan so the sauce, cheese and pasta water became a nicely emulsified sauce and then added some torn fresh basil and of course, more cheese on top. So delicious and simple to make and a wonderful way to showcase some of summer’s great offerings…

A couple weeks later, I was craving Korean food and beef and instead of opting for Seamless, thought I’d finally try out the Lucky Peach cookbook, Lucky Peach Presents 101 Easy Asian Recipes. Were the recipes actually easy? This soy-braised short rib dish certainly was and, with the new potatoes and carrots, proved to be a full meal in itself. Would I have to get random-ass Asian pantry items? Not really – as I already always have soy sauce, mirin and toasted sesame oil on hand (the most Asian of the ingredients listed). As with any kind of braise, it takes a few hours at low heat on the stove for the meat to become super tender but damn is the wait worth it (plus it makes the entire apartment smell amazing). I found some super funky napa cabbage kimchi in the fridge and leftover Momofuku ginger scallion sauce to counteract the richness of the beef and parked my ass in front of the television to watch Stranger Things for a perfect quiet evening at home. 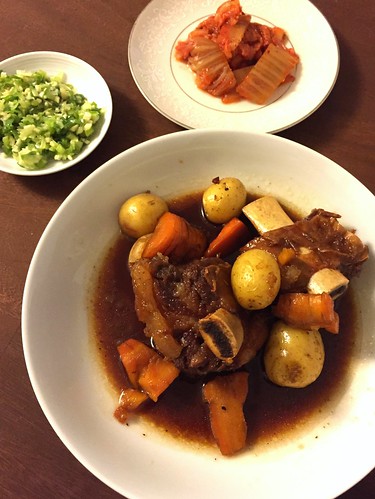 Last week, I actually managed to cook three separate times, including the below dinner with Cindy. I missed the salmon dish I used to order from Il Brigante all the time when I worked in the Financial District so made seared salmon fillets with a punchy lemon caper sauce using this Williams-Sonoma recipe as a rough guideline, a classic broccoli salad with mayo-mustard dressing, toasted slivered almonds, grape tomatoes, bacon (of course) and red onion, and my tried and true roasted potatoes with an insanely good truffle mayo I’d brought back from my trip to Paris. Had a nice crisp white wine and have to say even I was impressed with how great of a meal it was. 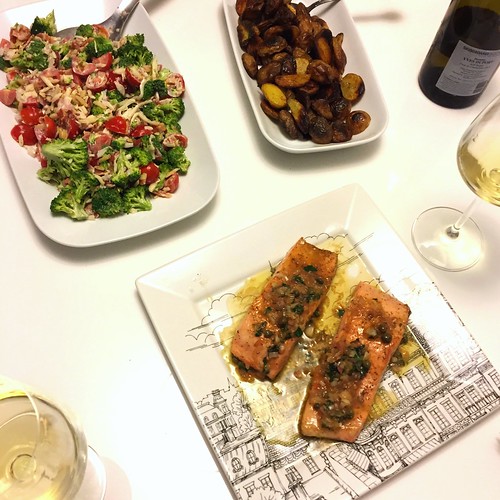 Then, this past Friday, instead of going out to eat with Cindy and Beth, I managed to leave the office a bit early and put together this eggplant involtini (I’ve been making and modifying this recipe since law school). It’s a lighter take on a classic eggplant parmesan that doesn’t involve all that breading and frying yet still comes out bubbly, cheesy and super satisfying. In an effort to eat more greens, I also made a salad of wild arugula, grape tomatoes, slivered almonds, avocado, shaved parmesan and this wonderful, easy mustard dressing from Bon Appetit. Again, modified it a bit to personal taste (I like a lot of acid in my dressings) and it turned out to be a hit. Plus, I had plenty of dressing leftover for subsequent salads.

Rounding out the meal were some fantastic cheeses and charcuterie from Murray’s provided by Cindy, a couple bottles of wine (whatever I had in our fridge) and then superb Lady M desserts courtesy of Beth. I’ll always love trying new restaurants and bars but it’s been so nice to spend some relaxing time at home, both in the kitchen and at the dining table, in the company of wonderful friends with delicious food and wine. I can only hope this trend will continue as the weather starts to get chillier and I can really bust out the braises, stews and baked goods and crank up the oven. 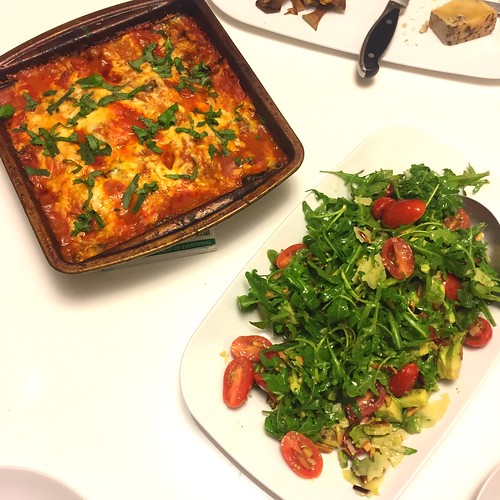 You are currently reading Sunday and impromptu dinners at Notes on Food.