Osteria Morini is White’s more casual and homey trattoria in Soho, a great neighborhood spot where you can drop by, sit at the bar and enjoy a glass of red wine with one of their amazing pastas. Laura and I shared all of our dishes – a comforting and creamy chard and artichoke gratin, the cappelletti and the spaghetti. The cappelletti is a truffled ricotta ravioli with melted butter and prosciutto and one of our favorites. The portion may look small but it’s packed with so much flavor and richness that after several bites, you feel completely satiated. We also tried the spaghetti alle vongole for the first time and the brininess and acidity of the pasta was a nice foil against the cappelletti. Another great dinner at Osteria Morini. 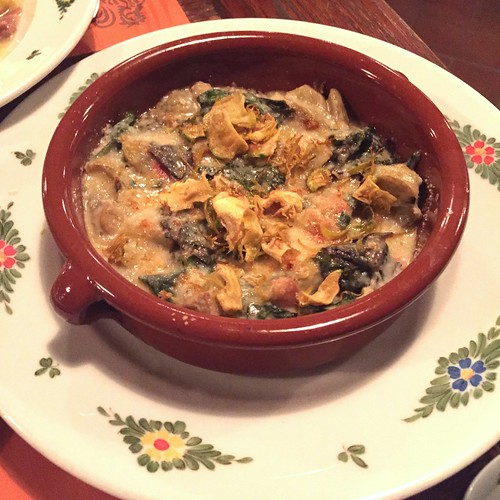 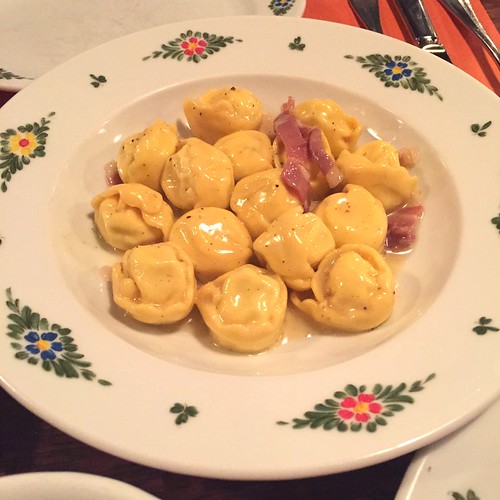 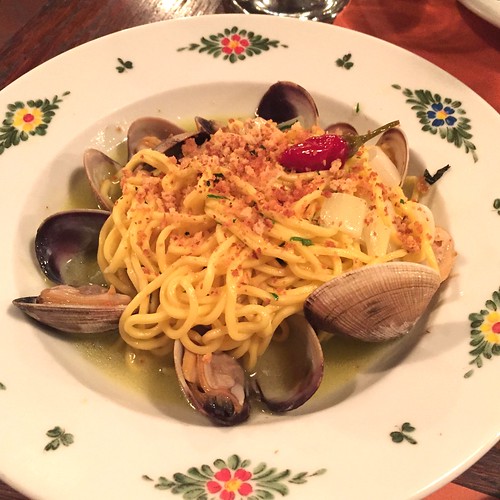 The second Michael White meal was an amazing, first-time dinner at his flagship by Columbus Circle, Marea. Seafood and pasta reign supreme here and there’s a four course prix fixe menu for $99 that might be one of the greatest upscale dinner deals in the city. Alice and I started with a complimentary amuse bouche, a selection of freshly baked olive and onion focaccia breads (which I had to force myself to stop eating after two pieces) and the ricci – the famous sea urchin and lardo with sea salt on toast, possibly the most gluttonous and delicious crostini/bruschetta you could ever have. 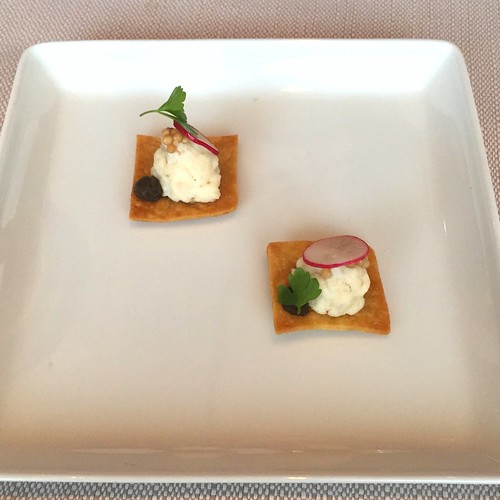 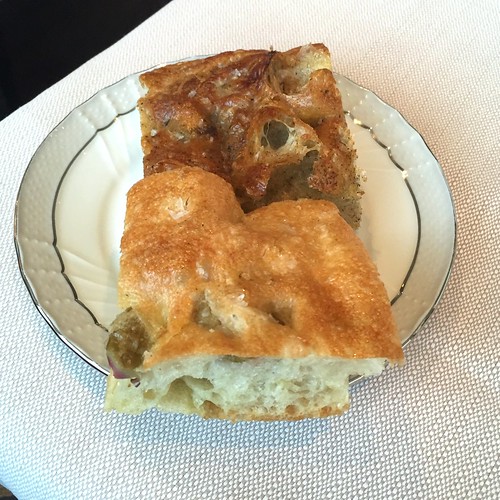 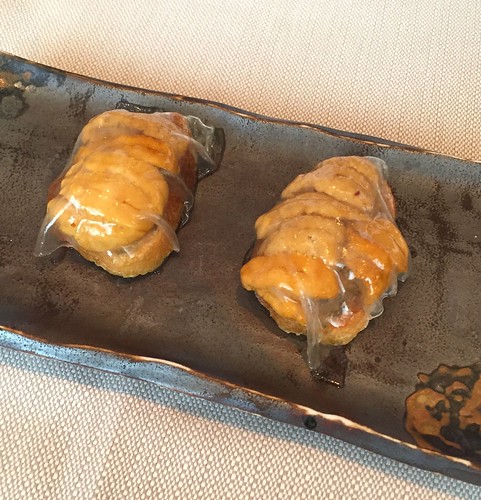 For our antipasti, Alice chose the artichokes with blue crab, bottarga (salted and cured mullet roe) and garbanzo beans, a really beautiful plate, and I ordered the Nova Scotia lobster with burrata, eggplant al funghetto and basil, surprisingly refreshing and well balanced in its flavors. 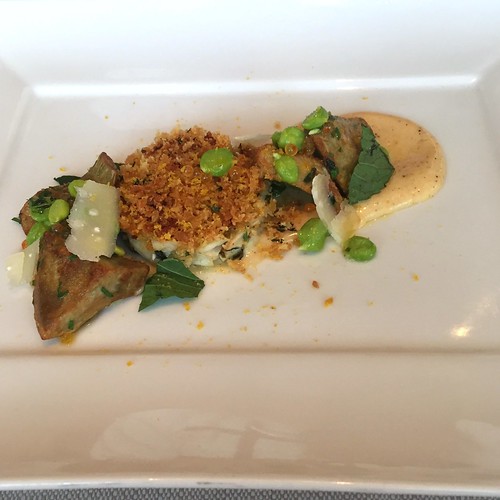 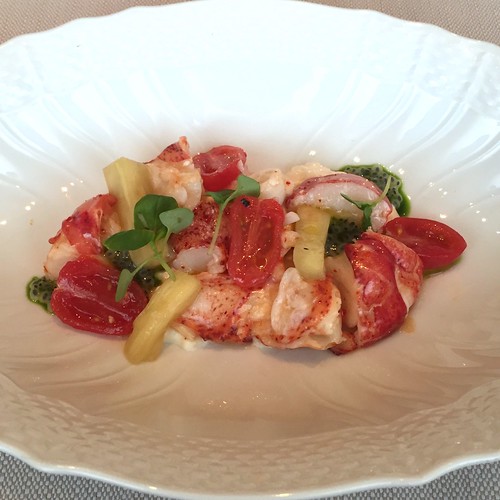 My primi course was the fusilli with bone marrow, baby octopus and red wine sauce, one of the most popular dishes at Marea and with good reason. The fresh pasta was perfectly cooked and the sauce had delicious little nuggets of umami thanks to the marrow. Alice’s pasta of strozzapreti with jumbo lump crab, sea urchin and basil looked amazing as well. How could that be bad? We also asked for wine recommendations for this course and the following course and the sommelier’s suggestions were totally on point. 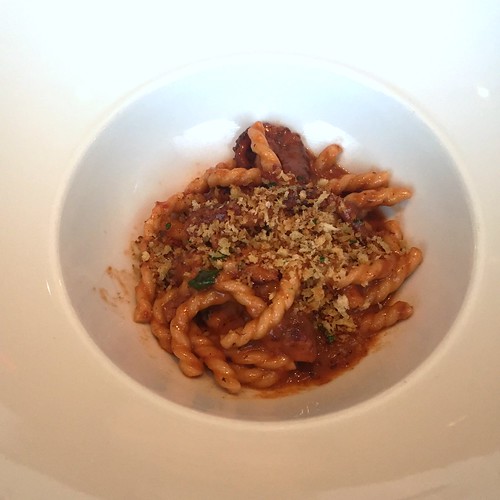 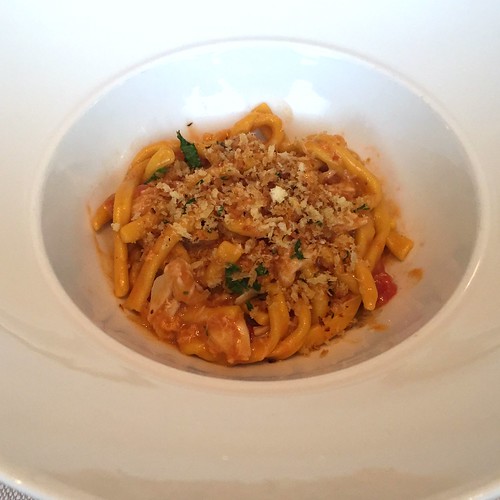 For our main courses, I ordered the capesante – four enormous seared sea scallops, crispy potato, morels, lamb’s quarters and mushroom cream. The morels and greens had a lovely, earthy flavor that complemented the sweet and tender scallops. Alice’s monkfish with romanesco and mushrooms was also a beautiful looking dish. At this point, we were starting to really struggle with how much food we’d eaten at this point as the portions for the prix fixe were very generous. 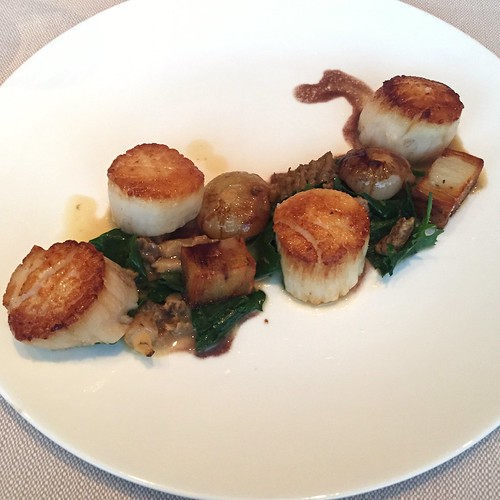 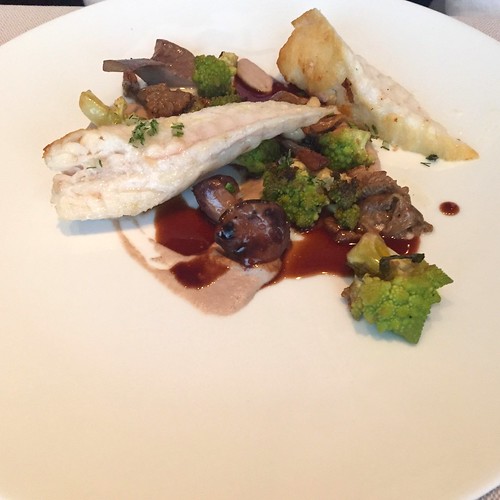 Finally, dessert. Both were gorgeous looking dishes but I could only take a few bites of my budino al limone (a lemon pudding torta served with honey and blackberry fennel sorbetto) before throwing my hands up and surrendering. They also presented some mignardises and a mini crumb cake to take home for breakfast the next day, which was a great end to a hell of a meal. I will definitely be back. 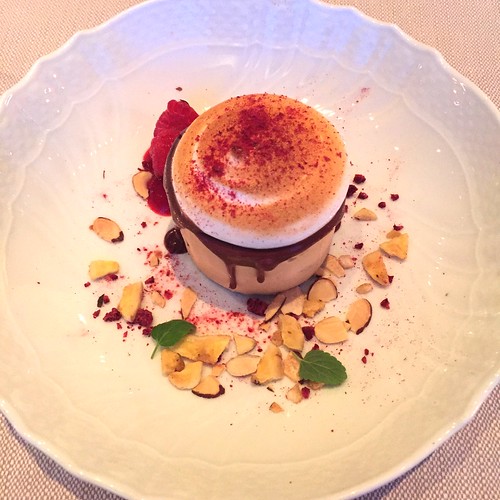 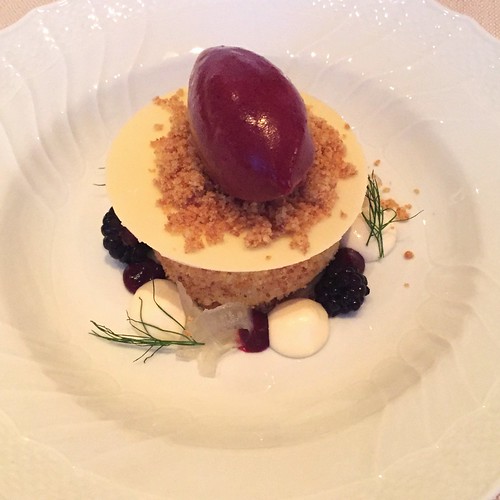 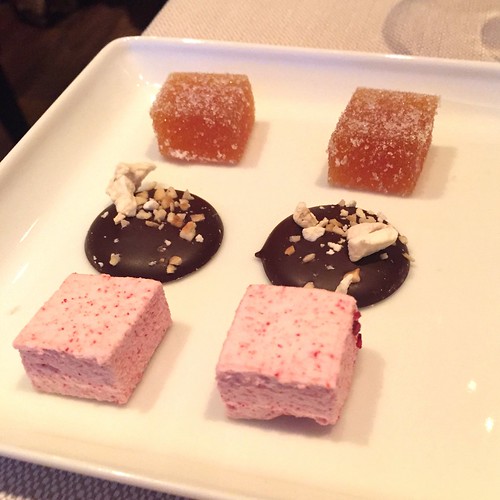 You are currently reading Osteria Morini and Marea at Notes on Food.